The wait is finally over for music enthusiasts and Olamide and Phyno supporters since the dynamic and electrifying pair will soon release a new single. On January 27, 2023, Phyno and Olamide will release a brand-new single, Phyno revealed on his social media accounts. “Ojemba,” according to the rapper, is the song’s name. Given that the legendary duo is renowned for their notable singles and album releases, this announcement thrilled many fans.

This would be Olamide’s second feature release in January 2023, which is interesting because many people have the impression that 2023 may bring us more of Olamide’s high-caliber songs. The first tune he was a part of was DJ Spinall’s “Bunda,” which was worth the hype and spiced up by Baddo’s rendition. But when it comes to Phyno and Olamide, it’s more of a partnership than a mere collaboration, as the two certified hitmakers have proven their joint awesomeness over the years, especially on the collaborative classic hit project “2 Kings.”

The forthcoming single would also serve as Phyno’s first single of 2023, which follows his last single, “Bad B*tches Only (BBO).” Before that, he had linked with Tekno for the hit song “Full Current,” which now has over a million Spotify plays. So “Ojemba” is undoubtedly that jam to watch out for.

Tags
Olamide Phyno
Ikedichim Chibundu Follow on Twitter January 24, 2023Last Updated: January 24, 2023
Back to top button
Close
We use cookies on our website to give you the most relevant experience by remembering your preferences and repeat visits. By clicking “Accept”, you consent to the use of ALL the cookies. In case of sale of your personal information, you may opt out by using the link .
Cookie settingsACCEPT
Manage consent 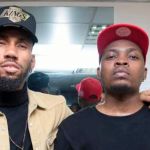