Skepta, a Nigerian-British rapper, will debut this week in the art world. From September 8 to 13, Sotheby’s New Bond Street galleries will host the artist’s debut public exhibition of the oil painting “Mama Goes to Market.” Skepta’s debut piece of art will be auctioned off after its display as a part of the Contemporary Curated series sale he co-curated for Sotheby’s.

The artwork will be offered for sale as a component of a group exhibition that also features pieces by Ouattara Watts, Theaster Gates, and Omar Ba. Skepta is a co-curator and personally chose nine of the works that will be on display and for sale. All nine were chosen by him personally because “they all had an African sense about them.”

“Whether songs were produced by African musicians or not, they all share in this essence. They initiated significant discussions with my painting in one way or another. For me, it’s about that beautiful thing of being able to look at a picture and feeling an emotion. If I look at an art piece and feel something, I fall in love with it.” said Skepta in his statement regarding the new art.

Skepta produced the piece of art titled “Mama Goes to Market” in 2020, during the beginning period of the world’s lockdown. His memories of Nigeria from his boyhood served as the basis for the project.

Tags
Skepta
Ikedichim Chibundu Follow on Twitter September 7, 2022Last Updated: September 7, 2022
Check Also
Close
Back to top button
Close
We use cookies on our website to give you the most relevant experience by remembering your preferences and repeat visits. By clicking “Accept”, you consent to the use of ALL the cookies. In case of sale of your personal information, you may opt out by using the link .
Cookie settingsACCEPT
Manage consent 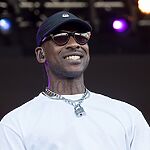 Skepta, A Nigerian-British Rapper, Will Auction His First Work Of Art For Up To £40,000