Streaming has mostly displaced CD, but the CD isn’t dead just yet. In fact, there appears to be some revival for the CD right now. According to multiple reports, for the first time in 17 years, CD sales are up.

Adele, Taylor Swift, Carrie Underwood, BTS and Olivia Rodrigo, among others (the complete list is below), have provoked a radical revival for the CD. And for lovers of vinyl, there’s more than enough reason to celebrate.

With her album “30,” Adele takes the driver’s seat among artists creating a new renaissance for the CD. Had the album not been released last year, the number of CD album sales would likely have followed previous patterns of record lows. Instead, her CD sales alone account for nearly 2.15% of all CDs. It remains to be seen if the revival will continue in the New Year or if CD sales will slump again.

Tags
Adele BTS Taylor Swift
John Anusie Follow on Twitter January 7, 2022Last Updated: March 31, 2022
Check Also
Close
Back to top button
Close
We use cookies on our website to give you the most relevant experience by remembering your preferences and repeat visits. By clicking “Accept”, you consent to the use of ALL the cookies. In case of sale of your personal information, you may opt out by using the link .
Cookie settingsACCEPT
Manage consent 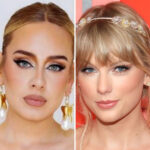 Taylor Swift, BTS & Adele Boost CD Sales In The U.S. For The First Time In 17 Years