Young Thug rates Nicki Minaj very high, and he’s not afraid to say the same public. American throbs with many female rappers, but Young Thug doesn’t rate most of them.

But Onika Tanya Maraj? The songstress, who’s long famous as Nicki Minaj, falls in the top five female rappers of all time on Thugger’s list.

The songster made this known in a recent post to his Instagram Story. While admitting the “Megatron” singer into his top five, he was generous enough to add that it was just for him.

In other words, to each his opinion. People might have their own lists, which might not include Nicki. By the way, he tagged her to the post.

Young Thug picking Nicki Minaj as one of his female artists of all time shouldn’t be surprising, perhaps. The songstress has done remarkably well as a musician. She’s as chart-topping as they come. She’s also one of the top-selling musicians out there. And when she speaks, the industry listens.

Tags
Nicki Minaj Young Thug
John Anusie Follow on Twitter January 7, 2022Last Updated: March 31, 2022
Back to top button
Close
We use cookies on our website to give you the most relevant experience by remembering your preferences and repeat visits. By clicking “Accept”, you consent to the use of ALL the cookies. In case of sale of your personal information, you may opt out by using the link .
Cookie settingsACCEPT
Manage consent 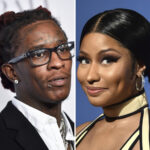