Another Yung Joc moment from his lengthy interview has gone viral after defending himself against T-“cap” Pain’s reaction to his previous VladTV footage. In one narrative, Joc said that Cassie shaved her head at Diddy’s request after he told her to do so while out at a party. Cassie and Diddy dated for 11 years before calling it quits, and she married her now-husband Alex Fine just a few months later.

“Me and Cassie sitting next to each other, my wife right here, Cassie right here,” Joc elaborated. “The n*gga jumped off the bar, came over, and said, ‘Yo, yo Cassie, tomorrow I want you to shave the side of your head.”

“I was like, ‘What the f*ck kinda request is that?'” recalled the rapper. “So, when I looked up there, this white woman had the side of her head shaved and the b*tch looked good with it. I said, ‘Cass, you not ’bout to do that, are you?’ She said, ‘Well, whatever Sean wants, I’m gonna do it.'”

For years, the singer’s shaved head was her hallmark appearance, and she wore it with pride. Cassie and her longtime media mogul boyfriend split up for reasons unknown, but they’ve both recovered. Cassie and her hubby, Alex, have had two children since 2019, and Diddy is apparently dating City Girls hit-maker, Yung Miami.

Watch Yung Joc tell his story in the video below.

Tags
Cassie Diddy Yung Joc
Ikedichim Chibundu Follow on Twitter June 8, 2022Last Updated: June 8, 2022
Check Also
Close
Back to top button
Close
We use cookies on our website to give you the most relevant experience by remembering your preferences and repeat visits. By clicking “Accept”, you consent to the use of ALL the cookies. In case of sale of your personal information, you may opt out by using the link .
Cookie settingsACCEPT
Manage consent 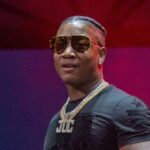