Kenneth Okonkwo is a famous Nigerian actor, film producer, lawyer, and politician. He is renowned for his role in the hit Nigerian film “Living In Bondage.” Kenneth Okonkwo gained fame playing romance and ritual roles, making him one of the country’s most sought-after actors. He is a natural on-screen, always wearing the roles he plays, like clothes tailored for him. Kenneth’s successful career has spanned many decades. 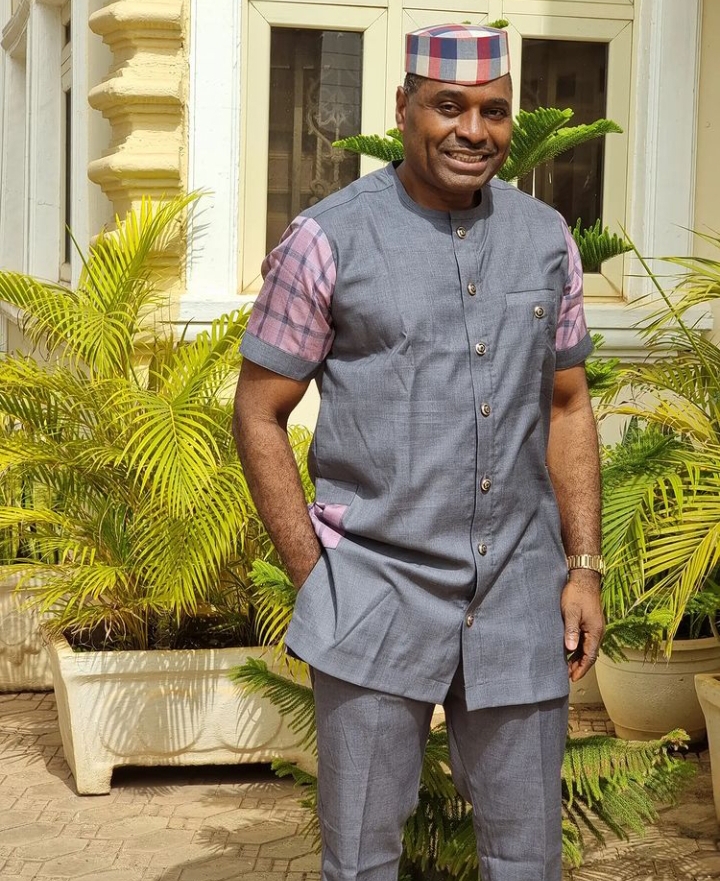 Kenneth Okonkwo was born in Nsukka in Enugu State, Nigeria, on the 6th of November, 1968. He celebrated his 53rd birthday in November 2021.

Kenneth Okonkwo was born to parents Mr. Ozioko Francis Okonkwo and Mrs. Beatrice Okonkwo in a refugee camp where his parents stayed after the Biafran war. He and his family remained in Nsukka, Enugu State, where he was raised. There is not much information about his parents and siblings.

Kenneth Okonkwo has been married twice. He seems to be quite the lover man off-screen. In 2000, Okonkwo fell in love with and married a woman named Ogechi Ezekiel. Ogechi is a pastor’s daughter, the then General Overseer of Christian Pentecostal Mission International. Their union was blessed with the birth of a son named Ifeanyi. Unfortunately, the couple split in 2002, two years after their marriage. Neither of them nor their families has revealed the reason for their split.

However, the actor stated in an interview that he does not support divorce. He also slammed claims that he had married Ogechi because of her wealth and her family’s influence. He also did not give a direct answer when asked about the rumors that his marriage failed because of his hot temper. However, he said that he would always defend himself if a woman violently attacked him.

Ogechi has since remained single and is currently the lead pastor of the Christian Pentecostal Mission International South Africa. It is unknown if Kenneth interacts with their son. Years later, Kenneth Okonkwo found love again with the help of his mother. He courted and married Ifeoma Okonkwo in 2007. The couple has been together ever since. It is rumored that his mother did all the work of finding her for him. He decided to meet her in person when she told him about her. He shared this in an interview with Mercy Michael. The couple fell in love after their first meeting.

The couple first struggled to have children. Their first and only child, a son, came nine years into their marriage in 2016. Kenechukwu Okonkwo was born on the 6th of May 2016 at the University of Maryland, St. Joseph Medical Centre, USA. He shared his gratitude to God and the people who stood by him throughout a chat with Diamond Celebrities.

Kenneth Okonkwo is the father of two children. His first child, Ifeanyi, was born while he was married to his first wife, Ogechi Ezekiel. He and Ogechi split following the birth of the child. 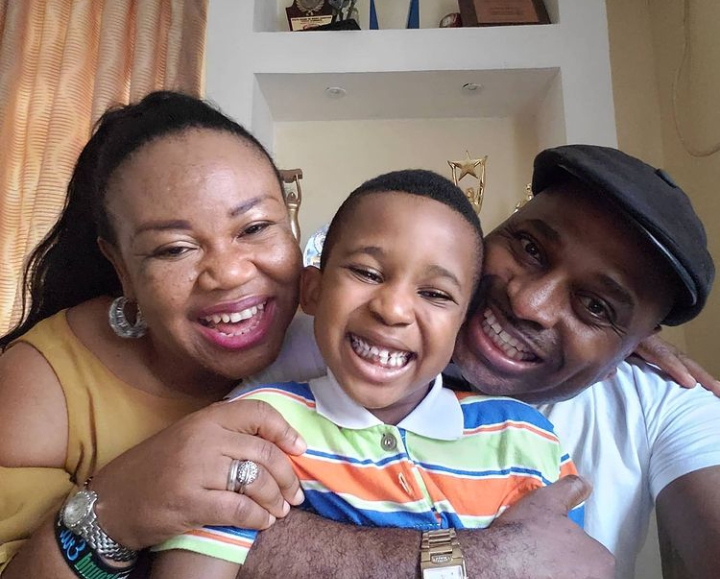 Kenneth’s second son, Kenechukwu, was born in 2016, nine years after his marriage to his second wife, Ifeoma Okonkwo. He is the first and only child of his parents.

Where the actor currently resides or the properties to his name have not been revealed.

The cars in his collection or those he drives are not disclosed to the public.

Through years of commitment and hard work, Kenneth Okonkwo has built a name and a sizable fortune for himself. He is recognized as one of Nollywood’s wealthiest and most influential actors. His net worth is reported to be $5 million. He has had a lot of success in the Nigerian film industry, Nollywood, and other endeavors.

In 2014, political activist Kenneth Okonkwo chose to run for office as the People’s Democratic Party (PDP) candidate for the Nsukka/Igbo Eze South Federal Constituency. The actor recently stated that he plans to run for governor of Enugu State in the general election in 2019. He also said he would run for office under the banner of the All People’s Congress (APC) Party. His desire to run for office is motivated by the need to establish a platform from which to advance Nollywood. He will join the group of Nollywood actors who are currently in politics if he succeeds. 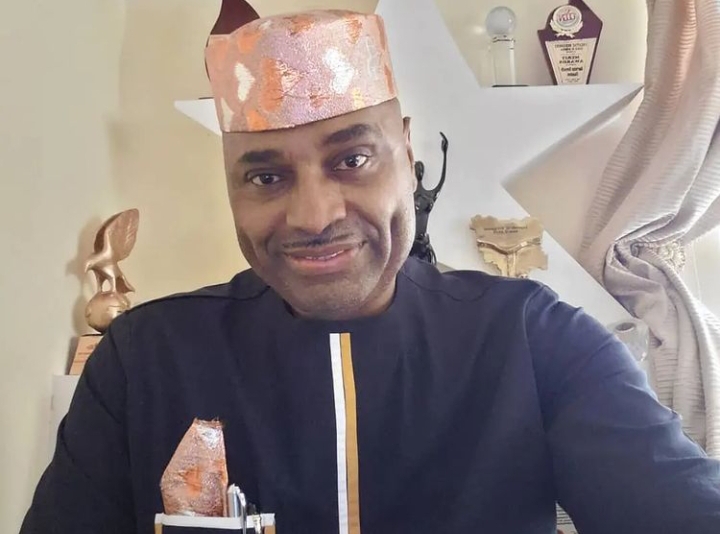 Kenneth Okonkwo has been in the Nigerian film industry, Nollywood, for over three decades. He made his debut playing Captain John Mark in the soap opera “Ripples.” However, he did not gain much recognition until he starred in the hit film “Living In Bondage.” He played Andy Okeke, a young man who joined a cult and sacrificed his wife for riches. Following the success of the film, Nigerians began calling him Andy Okeke. Okonkwo has since starred in several hit films, including Rich Families, Wives On Strike: The Revolution, Dumebi The Dirty Girl, and more.

Kenneth Okonkwo has appeared in more than 250 movies, making him well-known. His 27-year career has given not just Nigeria but all of Africa a lot of entertainment. He has been in several prominent films, such as Living in Bondage and Dumebi the Dirty Girl. He has also appeared in other films like Ripples, The Devil in Her, Mystery of Destiny, Wives on Strike, Oganigwe, Kingdom of Darkness, Royal Secret, Action King, and many more.

Where did Kenneth Okonkwo come from?

What did Kenneth Okonkwo study?

Kenneth Okonkwo studied Business Management at the University of Nigeria, Nsukka. Later, he obtained a Master’s Degree in International and Law Diplomacy from the University of Lagos. He also has a doctorate from the Chartered Institute of Economics.

Who are Kenneth Okonkwo's mother & father?

Yes. Kenneth Okonkwo is married. He is currently married to Ifeoma Okonkwo (since 2007).

Who is Kenneth Okonkwo's wife?

When was Kenneth Okonkwo called to bar?

Kenneth Okonkwo was called to the bar in 2009.

No. Mercy’s father is named Kenneth Okonkwo but isn’t a Nollywood actor.

When was Kenneth Okonkwo born?

Kenneth Okonkwo was born in Nsukka in Enugu State, Nigeria, on the 6th of November, 1968.

Tags
Featured Kenneth Okonkwo
Ikedichim Chibundu Follow on Twitter January 18, 2023Last Updated: January 18, 2023
Back to top button
Close
We use cookies on our website to give you the most relevant experience by remembering your preferences and repeat visits. By clicking “Accept”, you consent to the use of ALL the cookies. In case of sale of your personal information, you may opt out by using the link .
Cookie settingsACCEPT
Manage consent