The musicianship and songwriting abilities of Alter Bridge displayed on “Pawns and Kings” are superior to those of their contemporaries on a higher plane. Even the 4 to 5 minute songs, which may have been composed with radio play in mind, had structures light years ahead of their time. This is Alter Bridge’s best work in recent memory. It features an abundance of intense, heavy, aggressive, and memorable dual guitar riffage, topped by their signature contagious vocal melodies. 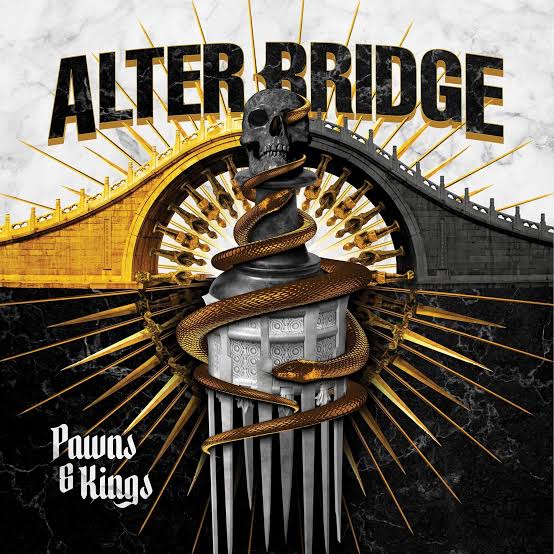 The design of a really long snake encircling a dark skull chess piece which forms half of what would seem to be an insignia or broche that signifies authority worn by royalty, obviously. That design in itself is also part of a bigger picture which really is a throne or at least a zoomed-out depiction of it. The art tends to show a seemingly close relationship between Pawns and Kings.

The album’s opening track, “This Is War,” is a banger with massive chugging riffs and thumping drums, but Kennedy’s amazing voice, which is always pitch-perfect and incredibly melodic, balances out the chaos going on around him, specifically in the form of Marshall’s deep bass and Tremonti’s savage guitar play. You can imagine crowds going crazy when this is played live because it defies you to stay still. “Dead Amongst The Living” has a heavy bouncing drum and bass opener combined with a down-tuned riff that runs throughout. It is reminiscent of some of their earlier work but is much heavier, with Kennedy in top form once more.

The hits just keep coming with songs like “Silver tongue,” which features a catchy chorus that will get stuck in your head, and “Sin on Sin,” a slower, heavier number with a crushing drum beat and grinding riff. The vocals mirror the intensity of the music, making for a fantastic track.

The Tremonti lead song “Stay” is arguably the best track on the album; pulling double duty on this rousing anthem, soaring riffs and killer melodic choruses are the order of the day. Having the support of a master vocalist like Kennedy doesn’t hurt either, but there is just something so contagious about this track that you can tell it’s special from the moment you hear it.

Kennedy’s almost bluesy crooning is the perfect counterpoint to “Holiday’s” gritty guitars and thumping bass, which give the song an edgy atmosphere. The epic “Fable Of The Silent Son” combines the band’s well-known melodic side with a bass-heavy middle section and a proggy kick. As is a recurring theme on the album, the guitar interplay between Tremonti and Kennedy is fantastic and is brought to the fore here with some amazing fretwork. This song is a strong contender for album-of-the-year status.

The melodic hard rocker “Seasons Of Promise” features uplifting riffs, more outstanding drumming and bass work from Phillips and Marshall, and Kennedy’s soaring vocals, which make this a well-rounded track. “Last Man Standing” is a force of nature that hits you square in the face. Marshall puts on a clinic in the fine art of bass playing as Phillips’ not so subtle drumming crashes in over the top. Tremonti and Kennedy again trade off on the guitar, first trading some groovy riffs before Tremonti demonstrates why he is one of the best guitarists in the world with a couple of tasty solos.

The title track, “Pawns And Kings,” is an all-out rocker that serves as the album’s final track. With its massive riffs, pounding drumbeat, and Tremonti slaying in a way only he can, it has the impression that the band expended all of its remaining energy to produce this masterpiece. It also leaves you wanting more.

The new album is a solid balance of light and darkness throughout which further cements the band as one of the best in the alt-rock scene.

Load more
Tags
Alter Bridge
Ikedichim Chibundu Follow on Twitter October 15, 2022Last Updated: October 15, 2022
Check Also
Close
Back to top button
Close
We use cookies on our website to give you the most relevant experience by remembering your preferences and repeat visits. By clicking “Accept”, you consent to the use of ALL the cookies. In case of sale of your personal information, you may opt out by using the link .
Cookie settingsACCEPT
Manage consent