“Lindeville” is an ambitious attempt to depict little villages in America with all of their flaws. Yes, there are meth heads, criminals, alcoholics, and cheaters, but middle America is also home to folks who have a stoic reserve, morality, and a quiet decency that occasionally go unnoticed by the nosier, more agitated citizens of these places. The spirit of southern desperation, suffering, and pride that permeates US small towns has been expertly conveyed by Ashley McBryde and her team of contributors and collaborators. 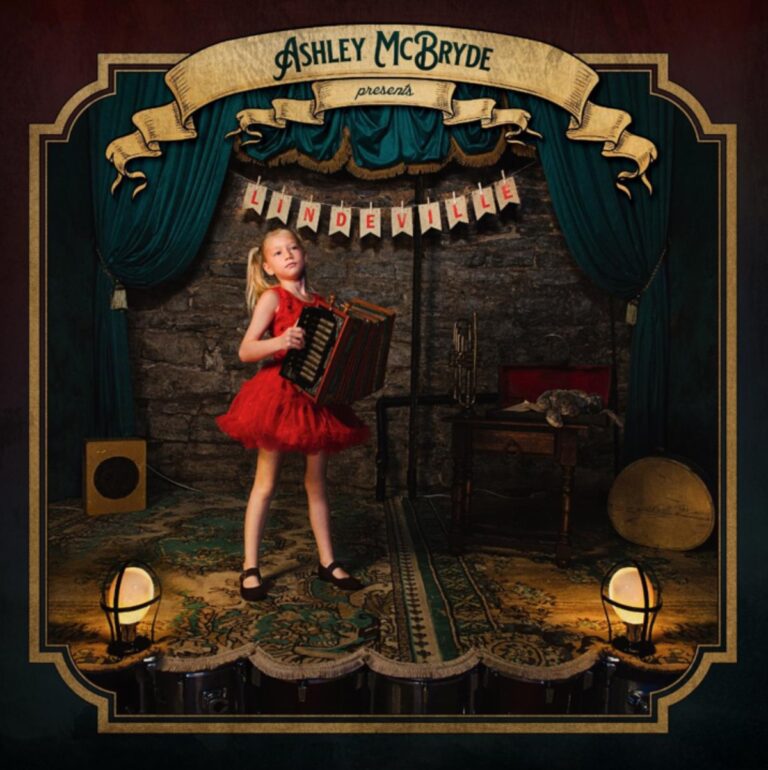 A little girl in a beautiful red dress can be seen holding a musical instrument of some sort, standing on a platform that quite similar to that of a stage judging from the floor lights. It looks like she is just about introducing the stage play with name displayed on the red block letters hanging behind her that together reads: “Lindeville.”

The same melody that starts the song “Brenda Put Your Bra On” and ends the title track serves as the album’s bookend. This song, which Ashley McBryde already performs live, depicts the adulterous couple just next door as McBryde, Caylee Hammack, and Pillbox Patti (Nicolette Hayford) engage in sexy phone-tree gossip.

The album is filled with stories of similar southern adversity. Aaron Raitiere’s song “Jesus Jenny,” which he both wrote and performed, relates the story of a lady who becomes “fucked up on vodka and Sprite.” ‘Gospel Night at the Strip Club,’ performed by Benjy Davis, sheds further light on characters like Brenda and Patti with its chorus built around the refrain “Hallelujah.” It is a soft yet melancholy acoustic tune that develops a beat in the second verse and worms its way into your awareness.

On tracks like “The Missed Connections Section of the Lindeville Gazette,” Aaron Raitiere and Brandy Clark play the characters of persons looking to cheat on their respective wives, further exploring southern faults. This straightforward but powerful story of adultery has a bluesy, almost ragtime, New Orleans-like feel to it, and the pianos cast an almost hypnotic spell. If McBryde can find a male counterpart for the first verse, it will be a great addition to her set.

The brilliant, bluesy song “If These Dogs Could Talk,” which plays with the notion that the dogs of the town are the real secret keepers and witnesses to all that happens, has one of “Lindeville’s” cleverest bits. Strong, true storytelling that is lighthearted but on point The song is one of the album’s standout songs because of its country-influenced sound.

The Brothers Osborne song “Play Ball,” which John Osborne also produced, centers on Pete, who looks after the baseball field at Dennis Linde Park. The song is performed with some grace and poise, as you might expect from TJ and John, and has a gentle strength similar to Pete. Pete is one of those quiet, stoic individuals who is full of knowledge and guidance despite having lost his “wife to cancer and a thumb in Vietnam.”

The Everly Brothers’ classic, “When Will I Be Loved,” as covered by McBryde, Brandy Clark, Caylee Hammack, and Pillbox Patti, is an upbeat, energizing, and melodic clarion call from the women of Lindeville that essentially asks, “When will things get good?” This tune complements “Bonfire at Tina’s,” the album’s standout track. The ladies have called a truce and gathered at Tina’s to lament the stresses and issues they must deal with in their various guises, roles, and relationships after reactivating the phone tree.

The title track concludes the tour of everyday life in Lindeville. A cheerful melody with a touch of elegance and calm, “Lindeville” is full of optimism. Although there is a meta-like sense that things won’t stay that way for long, there is delight in them doing so for the time being. Betty, Patti, Brenda, and Lerory are all having nice nights, managing to put their inner demons to rest for the time being. The town square clock is revealed in the third stanza to be the song’s narrator, the presence that has been keeping watch over them all for a long time.

The record is a daring venture. One that confronts the present rules of the mainstream Country music industry with a middle finger. Its intertwining plotlines and narratives combine to provide dramatic songs with imperfect individuals fighting to live in challenging situations.

Load more
Tags
Ashley McBryde
Ikedichim Chibundu Follow on Twitter October 1, 2022Last Updated: October 1, 2022
Check Also
Close
Load more
Back to top button
Close
We use cookies on our website to give you the most relevant experience by remembering your preferences and repeat visits. By clicking “Accept”, you consent to the use of ALL the cookies. In case of sale of your personal information, you may opt out by using the link .
Cookie settingsACCEPT
Manage consent