I Love Life, Thank You

Originally released on October 14, 2011, the 13-track project was Miller’s sixth mixtape and featured contributions from Talib Kweli, Sir Michael Rocks, Bun B, and The Come Up. I Love Life, Thank You was released following Miller’s “Road 2 a Million Fans” campaign, which he began in April 2011.

Keeping it simple, Mac chose to go with just words, designed in white and red. The words being his name, mixtape title with two extra thank yous and a little birdie providing the full stop with its fecal dropping, signifying nature and well, life. 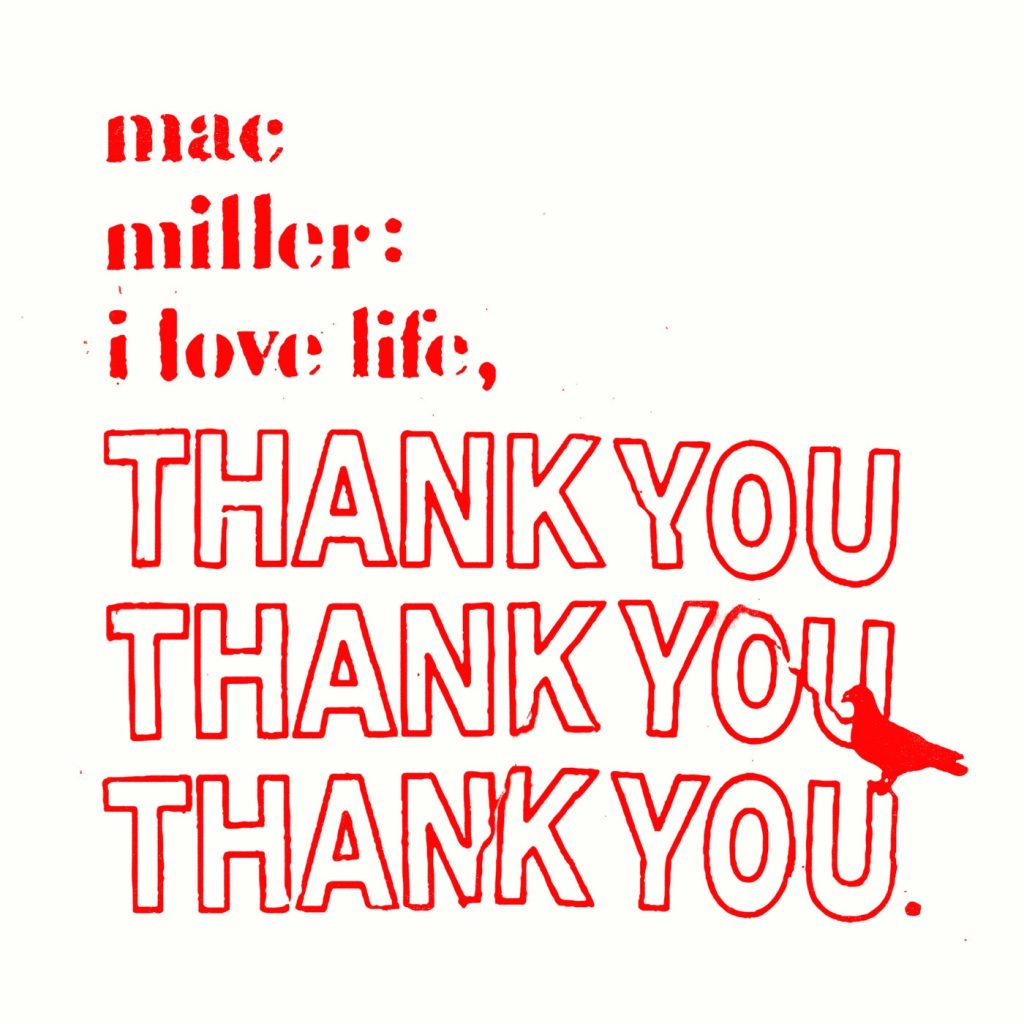 On the mixtape’s opener that also shares the same title as the mixtape itself, Mac us filled with gratitude for life, how far he had come and grown, especially with having hit a million followers on Twitter at the time. With bars flowing smooth like butter, the rapper also touched on the many crazy but nice perks of the fast life.

Sliding down to the shortlived “People Under The Stairs”, Mac went on about how he was better than his peers but in the same vein preaching the gospel of live and let live as he aspired to get even bigger than he was at the time. “The girls ask me for that Willie D,” he rapped on the chorus of “Willie Dynamite”, where he went on a bragging spree about the undying love the ladies had for him and his many sexcapades.

Going with his alcohol-inspired mental picture in the recording booth, according to him on the song, “The Scoop On Heaven”, Mac took us on a brief tour through his mind where he showed us a bright, little Utopia of what he imagined heaven to be. To him another version of paradise could also be beside his lover.

His emotions bled into “Love Lost” where he mourned the loss of a lover who showed him a great deal of love and affection, but couldn’t stick around to see it through. Sir Micheal Rocks joins him on the next song, “Pranks 4 Players” where they both get all braggadocio. The usual ‘I’m better than other rappers’ flow. Not a bad outing, though.

“Cold Feet” began from where the last track left off. Same bragging about the rap star life and bitches falling in his lap like manna. Then came the second feature on the project, “Family First” with Talib Kweli. The song felt like listening to a rap diary, as both artists reminisced and reflected on their lives after fame, with some real life struggles that go on behind the scenes which no one really gets to see, let alone understand.

“The Miller Family Reunion” continued on the path cleared out by the last track with a dash of feel-good nostalgia. You could literally picture an outdoor get-together of a large, happy Miller family which he did his best to portray on the verses of the song. On the pretty chill, laid-back “Boom Bap Rap”, The Come Up teamed up with Mac to deliver ever-so-smoothly their love and passion for what they do.

“Just a Kid” is pretty much how he was adjusting to the craziness of blowing up and his deep appreciation for all the people that loved and supported him, fans included. That same energy spilled into “All That” which featured Bun B. Together they made it clear that with stardom there is definitely more to what meets the eye.

Bringing things to a close, “All This” showed how grateful he was for all he had and for all the success he had garnered along the way to the limelight.

In one word, gratitude. Upon hitting one million followers on Twitter at the time, Mac deemed it fit to say thank you to his esteemed fans. And what better way to do that if not blessing the fans with good music.