Regardless of the fact that they had worked together on their chart-topping hit “TROLLZ,” the infamous rapper, 6ix9ine jumped to criticize Nicki Minaj after she had solicited for some help from her Barbz to up the YouTube views for “We Go Up,” her new record with Fivio Foreign, with whom 6ix9ine also has a bone to pick.

“If y’all don’t do what needs to be done with the #WeGoUpVideo I will significantly and I DO mean significantly…delay the…the…the…oh what’s the word… oh! the album,” Nicki wrote in a tweet. “That’s right. *sighs* the album *devil wears Prada Meryl Streep voice*.”

To that 6ix9ine gave his comments by coming at Nicki for threatening her fans. “I love Nicki .. but threatening the barbz and fans is crazy,” he wrote, before shading at Fivio Foreign after he had crowned himself the “King of New York”.

“You can’t make someone king that don’t got it,” Tekashi added. “Anyway if it’s that important to you got it that threat was crazy.” Nicki showed love to 6ix9ine by working with him on “TROLLZ” at a time when most rappers had turned their backs on him.

This wouldn’t be the first time 6ix9ine would be making shady remarks about Nicki Minaj. Pretty slimy.

Tags
Nicki Minaj Tekashi 6ix9ine
Ikedichim Chibundu Follow on Twitter April 21, 2022Last Updated: April 21, 2022
Check Also
Close
Back to top button
Close
We use cookies on our website to give you the most relevant experience by remembering your preferences and repeat visits. By clicking “Accept”, you consent to the use of ALL the cookies. In case of sale of your personal information, you may opt out by using the link .
Cookie settingsACCEPT
Manage consent 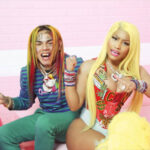