From the looks of it, Adele’s love for Megan Thee Stallion is far from over.

During the first night of her residency in Las Vegas, the “Easy on Me” singer entertained fans with some well-known dance moves. Adele used the same dance routines Megan Thee Stallion had originally created for her 2020 smash hit music video for her song “Body” while singing her 2016 single “Water Under the Bridge.”

As soon as they saw the moves, fans cheered Adele on Twitter and spread videos of the incident around. It was described as “so unexpected but iconic” by one fan. Let’s go back to 2021 to explain why this Adele and Megan Thee Stallion crossover is, as they say, “iconic.”

A Twitter user who questioned why Adele never uses backup dancers provided a mashup of Megan Thee Stallion performing to “Water Under the Bridge” at the American Music Awards. The ensuing video soon became popular online and gave rise to numerous memes. Additionally, there was a TikTok fad where individuals recreated Megan Thee Stallion’s dance moves to the Adele song, which led to a ton of humorous Twitter mashup videos.

Adele once performed at BST Hyde Park 2022 while channeling the meme of herself and the “WAP” rapper, breaking out some of Megan Thee Stallion’s “Body” motions. See what it looks like in the clip below.

Tags
Adele Megan Thee Stallion
Ikedichim Chibundu Follow on Twitter November 28, 2022Last Updated: November 28, 2022
Check Also
Close
Back to top button
Close
We use cookies on our website to give you the most relevant experience by remembering your preferences and repeat visits. By clicking “Accept”, you consent to the use of ALL the cookies. In case of sale of your personal information, you may opt out by using the link .
Cookie settingsACCEPT
Manage consent 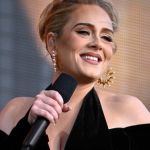