Following his win, Dave closed out the 2022 BRITs with a spectacular performance of ‘In the Fire’, bringing with him onstage the track’s featured guests, Giggs, Ghetts, Fredo and Meekz, alongside a gospel choir.

Accepting the awards, the rapper thanked God “first and foremost” and said, “I appreciate all the love from the fans.” He then proceeded to thank collaborator, Kyle Evans, his mother, friends and family.

“It’s for you guys that I feel like, it’s only right that I carry on doing the same thing, and for the people that are here today,” he added, specifically giving a shout-out to Best New Artist winner, Little Simz, and Ghetts, who was also nominated in the Hip Hop/Rap/Grime category.

This win marks his second BRIT Award, having previously bagged the Album of the Year BRIT award in 2020 for debut LP ‘Psychodrama’.

That year, he also performed a track, Black, off his then upcoming album, Psychodrama, released in 2019. Watch Dave’s amazing, pyrotechnic-fuelled rendition of his “In the Fire”, off his latest LP, ‘We’re All Alone in This Together’:

Tags
Dave The 2022 BRIT Awards
Ikedichim Chibundu Follow on Twitter February 9, 2022Last Updated: March 31, 2022
Check Also
Close
Back to top button
Close
We use cookies on our website to give you the most relevant experience by remembering your preferences and repeat visits. By clicking “Accept”, you consent to the use of ALL the cookies. In case of sale of your personal information, you may opt out by using the link .
Cookie settingsACCEPT
Manage consent 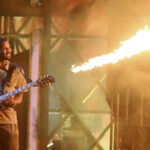 Dave performs ‘In the Fire’ at the BRIT Awards 2022 with a guitar-flamethrower: Watch