Dreamville artistes and Atlanta-born duo, EARTHGANG, did not show up with their new album, “Ghetto Gods”, on the scheduled date for its release, being the 28th of January.

As follow-up to their last, really cool album, Mirrorland, released in 2019, the duo announced that they’d be unleashing their next album and when. The news alone had fans excited and expectant.

The new album, Ghetto Gods, was announced at the same time its trailer was unveiled. Introducing the album in the teaser was fellow Atlanta native and trap rapper, 2 Chainz, who delivered with quality, the arrival of the forthcoming project.

Now you can imagine the let down on their fans when the album failed to pull through on the date it had been promised. Some fans expressed their frustrations on social media, while some were not very surprised.

The lack of surprise in such fans can be traced back to EARTHGANG, who did not as little as put out a cover art for the album, let alone a tracklist. Some fans put two and two together and knew better than to keep their hopes up.

On that same supposed release date, the duo were actually booked for a performance which they honored.

Tags
EARTHGANG Ghetto Gods Release Date
Ikedichim Chibundu Follow on Twitter February 2, 2022Last Updated: March 31, 2022
Check Also
Close
Back to top button
Close
We use cookies on our website to give you the most relevant experience by remembering your preferences and repeat visits. By clicking “Accept”, you consent to the use of ALL the cookies. In case of sale of your personal information, you may opt out by using the link .
Cookie settingsACCEPT
Manage consent 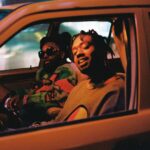