If Rolling Stone is capable of one thing, it’s making music lovers go viral. For its controversial opinions, the publication has frequently faced backlash. One recent example is the Top 200 Rap Albums list they published last month. Hip Hop imploded as a result of their placements, which sparked public criticism of the journal for purportedly failing to comprehend Rap culture and led to the public denunciation of that publication’s decisions by numerous musicians and business leaders.

Harry Styles was featured on the latest cover of Rolling Stone UK on Monday, August 22, kicking off the week. After leaving One Direction, the superstar created a sizable brand for himself, making him one of the most well-known musicians in the world.

Even so, things changed when word spread on social media that Styles was the “new King of Pop”—a term that has long been associated with Michael Jackson. Particularly in the Hip Hop and R&B communities, music enthusiasts criticized Styles’ most recent title, saying that if anyone should receive it, it should be Chris Brown or perhaps Justin Bieber.

The magazine received a direct tweet from Taj Jackson, Michael Jackson’s nephew: “There is no new King of Pop. You don’t own the title @RollingStone, and you didn’t earn it, my uncle did. Decades of dedication and sacrifice. The title has been retired. No disrespect to @Harry_Styles, he’s mega talented. Give him his own unique title.” 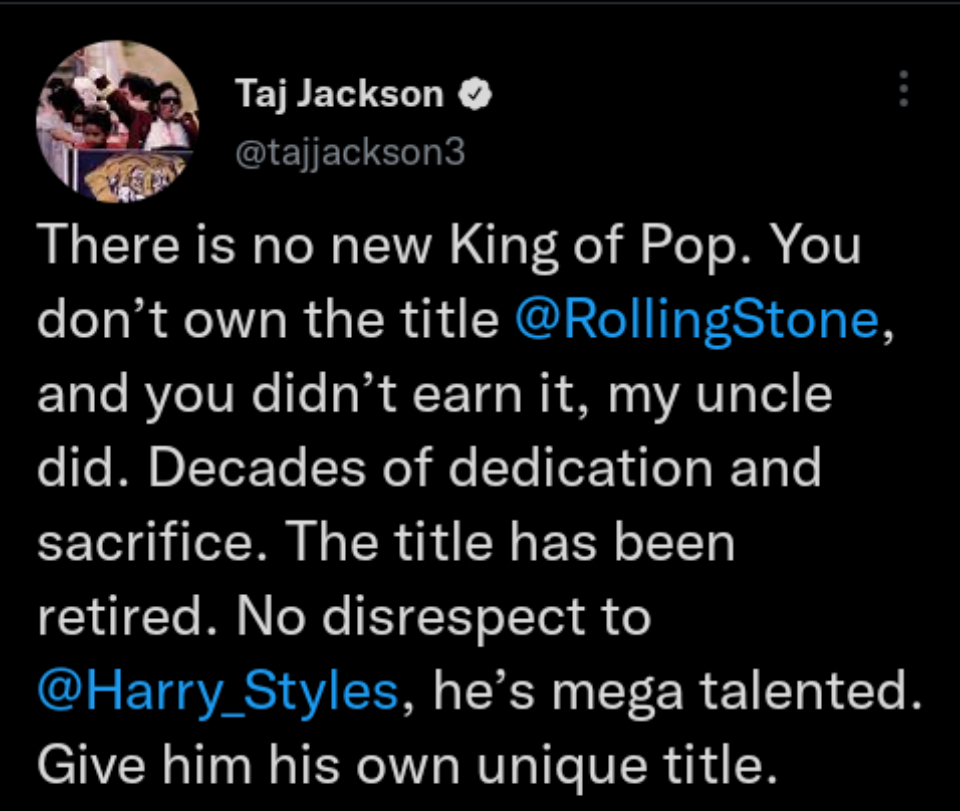 Out of anybody, they’re calling harry styles the “new” king of pop? pic.twitter.com/6TuN8L2yd9

who thought calling harry styles the new “king of pop” was a good idea??pic.twitter.com/c6rzVsfa6r https://t.co/00v9uUBG1k

Michael Jackson didn’t give us the biggest selling album of all time, invented a whole ass dance style, broke racial barriers, revolutionised the music industry, gave us immortal anthems and became god for yall to call Harry Styles the “new king of pop”pic.twitter.com/zDFEObY8Qy

Rolling Stone: Harry Styles is the new King of Pop.

Tags
Harry Styles
Ikedichim Chibundu Follow on Twitter August 23, 2022Last Updated: August 23, 2022
Check Also
Close
Load more
Back to top button
Close
We use cookies on our website to give you the most relevant experience by remembering your preferences and repeat visits. By clicking “Accept”, you consent to the use of ALL the cookies. In case of sale of your personal information, you may opt out by using the link .
Cookie settingsACCEPT
Manage consent