The product will be available across Canadian restaurants from June 6. In a statement released to communicate the new partnership, Bieber described the renewed collaboration as a dream come true.

“Doing a Tim Hortons collab had always been a dream of mine. I grew up on Tim Hortons and it’s always been something close to my heart,” the Canadian pop star said in a statement. He further expressed that the success of the first partnership has made it impossible for the duo to stop at Timbiebs. “We couldn’t stop at Timbiebs, we needed a Biebs Brew too,” he said.

Tim Horton himself made the announcement in a series of tweets on Twitter.

A French Vanilla cold brew coffee brewed using 100% arabica beans and will be cold steeped for 16 hours for flavour enhancement, Biebs Brew will satisfy both the cravings of Bieber and his global caffeine loving Beliebers.

To show that there could yet be more partnership in the work, the duo have also announced they are also set to release a limited-time stainless-steel tumbler with a reusable straw. Alongside the coffee, the stainless-steel product will be available for Fans to shop at restaurants from June 6.

According to a tweet from the franchise, their will also be a return for Bieber’s limited-edition Timbit flavours will also go on sale from June 6. The product will be a mixture of chocolate white fudge, sour cream chocolate chip and birthday cake waffle. Both products, the brew will be available to order together on the Tims app for $5.00. A “Biebs Bundle,” will include a large Brew and 10-packs of Timbiebs.

If well-received by Beliebers, the duo could yet make more collaborations to produce other products that would accompany their existing brews.

Enjoy the promotional video from the duo.

@justinbieber is back with Biebs Brew: a new co-created French Vanilla Cold Brew. Mark your calendar. June 6. Oh and did we mention Timbiebs are back too? 👀 pic.twitter.com/5OgYempdef

Tags
Justin Bieber Tim Hortons
Olumide JokotadeMay 18, 2022Last Updated: May 18, 2022
Check Also
Close
Back to top button
Close
We use cookies on our website to give you the most relevant experience by remembering your preferences and repeat visits. By clicking “Accept”, you consent to the use of ALL the cookies. In case of sale of your personal information, you may opt out by using the link .
Cookie settingsACCEPT
Manage consent 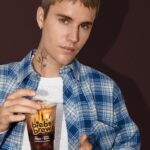