Masego returns with “Say You Want Me,” the first single from his forthcoming album. The  GRAMMY®-nominated artist’s silky, sultry vocals float atop a percolating rhythm on the song, which was released today via EQT Recordings/Capitol Records. Ambré, Ari PenSmith, Mannywellz and Destin Conrad also contribute vocals. The track was produced in Los Angeles by P2J (Beyoncé, Burna Boy, Wikzid’s Made in Lagos, which included “Essence”) and E.Y. (Drake, Childish Gambino) along with Louie Lastic and Dan Foster, known for their work with Kehlani and Ambré. Listen to “Say You Want Me” HERE:

——-“Masego is the name I want to hear you say when you mention life, music, black romance and dance,” says Masego, who has amassed nearly two billion combined global streams in his career to date.

——-NPR hailed Masego as “one of music’s most promising chameleons.” VIBE praised him as a “self-taught saxophonist, pianist, singer, and producer here to give an old soul sound a fresh new take in today’s hip-hop climate.” XXL observed, “Masego has created and curated a new wave.” His 2018 debut album, Lady, Lady, included the breakout hit single “Tadow,” which has been certified Platinum in the U.S., Diamond in Brazil and Gold in Mexico. Earlier this year, Masego featured on “Silk,” a single from Kojey Radical’s Mercury Prize-nominated debut album.

Tags
Masego
Ayodeji Ibrahim Lateef Follow on Twitter November 4, 2022Last Updated: November 4, 2022
Check Also
Close
Back to top button
Close
We use cookies on our website to give you the most relevant experience by remembering your preferences and repeat visits. By clicking “Accept”, you consent to the use of ALL the cookies. In case of sale of your personal information, you may opt out by using the link .
Cookie settingsACCEPT
Manage consent 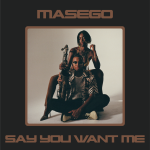 Masego Unveils New Single And Video, “Say You Want Me”