After hearing Beyoncé’s most recent track, “Break My Soul,” Michelle Obama praised the singer highly on social media. Renaissance, the famous singer’s highly-awaited seventh studio album, will be set to release later this summer, and the track is its lead single.

“Queen @Beyonce, you’ve done it again!” the ex-first lady began her Instagram post. “‘Break My Soul’ is the song we all need right now, and I can’t help but dance and sing along while listening to it. Can’t wait for the album!”

Obama and Beyoncé have a long history of friendship. In appreciation of Obama’s inclusion on Time magazine’s yearly list of the 100 most influential people in the world in 2019, the singer even wrote a moving essay in her honor. In addition, Beyoncé gave performances at the 2013 and 2009 inaugural balls.

“When I first met her, I was embraced by a warm, regal, confident woman who possessed a reassuring calm, on the eve of President Obama’s historic first Inauguration,” Beyoncé penned in an essay for Time magazine. “The way she looked, walked and spoke, in that warm but authoritative tone, we saw our mothers and sisters. She was strong and ambitious and spoke her mind without sacrificing honesty or empathy. That takes a lot of courage and discipline.”

Tags
Beyonce Michelle Obama
Ikedichim Chibundu Follow on Twitter June 22, 2022Last Updated: June 22, 2022
Check Also
Close
Back to top button
Close
We use cookies on our website to give you the most relevant experience by remembering your preferences and repeat visits. By clicking “Accept”, you consent to the use of ALL the cookies. In case of sale of your personal information, you may opt out by using the link .
Cookie settingsACCEPT
Manage consent 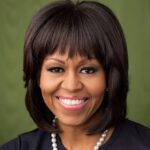