Despite the fact that Azealia Banks frequently causes controversy and receives criticism for some of her opinions on current events, she is an individual of undeniable skill. Even before it spreads through mainstream means, the Harlem rapper pushes the limits of creativity.

Shortly after the release of Drake’s dance album Honestly, Nevermind and Beyoncé’s latest track, “Break My Soul,” Banks became a trendy subject during the past several days. Her admirers have been showering her with flowers and recognizing her for all she has accomplished.

Unofficial mash-ups between Beyoncé’s most recent album and a few songs from Banks’ discography have been made by some fans. Azealia doesn’t appear to particularly appreciate the remix of “Break My Soul” and “Fuck Him All Night,” which has surfaced online.

This morning, the rapper posted a message on her Instagram Story asking her followers to stop making remixes of her songs. She even went so far as to call them “horrible.” “Please for the love of God. Stop the Break My Soul AB mashups,” she wrote. “They are horrible.” 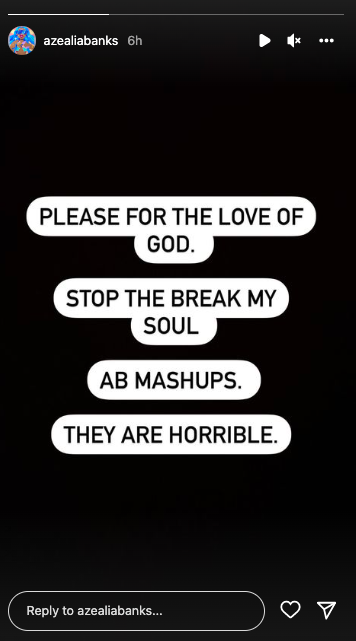 Azealia Banks’ most recent song, “I Rule The World,” which was created by Shlomo, was released earlier this month. The Harlem artist released Yung Rapunxel: Pt. II as her most recent work in 2019.

Tags
Azealia Banks
Ikedichim Chibundu Follow on Twitter June 24, 2022Last Updated: June 30, 2022
Check Also
Close
Back to top button
Close
We use cookies on our website to give you the most relevant experience by remembering your preferences and repeat visits. By clicking “Accept”, you consent to the use of ALL the cookies. In case of sale of your personal information, you may opt out by using the link .
Cookie settingsACCEPT
Manage consent