With anticipation building up for the March release of his most recent project, davido has released a snippet of a dj-khaleed produced work that will most probably be among the songs in the tracklist.

As a preview of a previously unreleased song by Davido and DJ Khaled, the internationally renowned and multiple award-winning Disc Jockey and producer, appeared on social media, 2023 seems like a year we would be kept entertained in terms of back-to-back releases from the unique talents in the music industry.

A sneak peek of an unreleased song featuring Davido, DJ Khaled, and Stig Da Artist has appeared on social media as fans get ready for the upcoming music release from one of the top musicians in the business. Many people eagerly anticipate what the 30 BG boss will have in store for them after the early-morning clip from Tuesday, January 24, 2023, was released.

Even though a specific release date has not yet been announced, the project’s progress is what most people are now focusing on.

Davido’s comeback season is what is on the lips of almost all adoring fans, as the 30BG lead has been off the radar following the death of his son. However, he made his first appearance after the hiatus at the closing ceremony of the FIFA world cup last year and has since moved on to making other appearances for the media.

A few weeks back, he was in the news following his reaction to wizkid’s proposed joint tour.

Tags
Davido DJ Khaled
Ebuka NwachukwuJanuary 25, 2023Last Updated: January 25, 2023
Back to top button
Close
We use cookies on our website to give you the most relevant experience by remembering your preferences and repeat visits. By clicking “Accept”, you consent to the use of ALL the cookies. In case of sale of your personal information, you may opt out by using the link .
Cookie settingsACCEPT
Manage consent 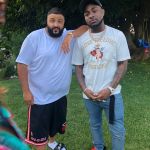