Nicki Minaj, A$AP Rocky, and Future, among a slew of other prominent hip-hop artists, have been revealed as the three headliners for the forthcoming 2022 edition of Rolling Loud’s New York event. Citi Field will host the three-day event in September.

When Rolling Loud originally began in 2015, it only had one festival in Miami. The group didn’t add an annual New York event to its calendar until 2019. Unfortunately, the coronavirus pandemic forced Rolling Loud to postpone its New York festival a year later. 50 Cent, J. Cole, and Travis Scott headlined the festival in 2021.

The news comes after the event announced its Rolling Loud Miami roster, which includes Kanye West, Kendrick Lamar, and Future. In July, that festival will take place. Rolling Loud New York will take place at Citi Field in Queens from September 23 to 25. The event’s tickets will go on sale this Friday, June 17th at 12:00 p.m. ET.

The complete lineup is listed below. 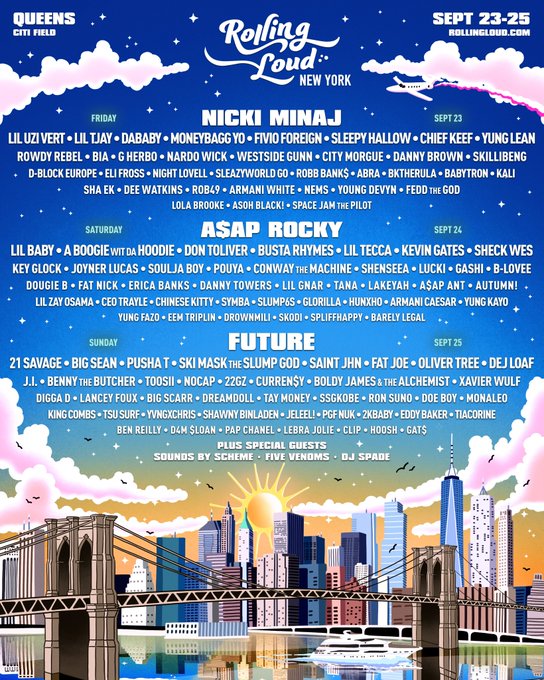 Tags
Rolling Loud NYC 2022
Ikedichim Chibundu Follow on Twitter June 15, 2022Last Updated: June 15, 2022
Back to top button
Close
We use cookies on our website to give you the most relevant experience by remembering your preferences and repeat visits. By clicking “Accept”, you consent to the use of ALL the cookies. In case of sale of your personal information, you may opt out by using the link .
Cookie settingsACCEPT
Manage consent