As he presents him with a brand-new Mercedes Benz, emerging Nigerian musician Seyi Vibez makes his producer happy.

Seyi Vibez, a young and bustling entertainer, was filmed giving his producer a brand-new automobile in a video that has gone viral.

Seyi Vibez acquires a Mercedes Benz for his producer, Modra

In the footage, the producer, Modra, grins as he grabs the singer’s keys. He also extended a heartfelt hug of gratitude to the artist.

Seyi Vibez received praise from certain followers on social media for his thoughtful act toward his producer. Likewise, he received these praises from many in the comments.

In the video, Seyi Vibez thanked his producer for his efforts on his album “Billion Dollar Baby” and gave him the brand-new Mercedes. Modra strained to contain his enthusiasm and covered his mouth with his hands before retreating to a corner. This is a good case representing the Davido quote, “We rise by Lifting Others.”

In case you forgot, Seyi Vibez released his 11-track album “Billion Dollar Baby” on October 2022, along with a deluxe version nearly immediately after. Due to its fantastic tracks, which include “Kun Fa Yakun,” “Bullion Van,” and “Chance (Na Ham),” the album is unquestionably one of the crazes of the moment.

Seyi Vibez and Zinoleesky are said to have recently worked together on a song titled “Ewa.”

Tags
Modra Seyi Vibez
Ebuka NwachukwuJanuary 24, 2023Last Updated: January 24, 2023
Back to top button
Close
We use cookies on our website to give you the most relevant experience by remembering your preferences and repeat visits. By clicking “Accept”, you consent to the use of ALL the cookies. In case of sale of your personal information, you may opt out by using the link .
Cookie settingsACCEPT
Manage consent 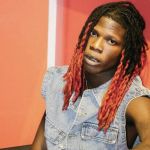