Last year, when Dame Dash tried to join the NFT craze, he ruffled some feathers. The Roc-A-Fella co-founder was accused of attempting to sell the rights to Jay-Z’s Reasonable Doubt in an NFT auction, but Hov and his attorneys promptly shut it down. Dame Dash was sued in an attempt to stop him from selling the project as a non-fungible token, but it appears that he and Roc-A-Fella have come to an arrangement.

Dash and RAF have settled their legal issue, according to TMZ. Dash agreed that neither he nor any other Roc-A-Fella shareholder can sell Reasonable Doubt because it belongs to the firm. The arrangement does, however, allow Dame to sell his firm shares if he so desires.

Dame Dash and Jay-Z haven’t spoken in years, but Dash recently invited the Rock and Roll Hall Of Famer to reconcile their issues. Jay expressed his gratitude to Dash during his indication speech. Despite the fact that the Reasonable Doubt legal case was eventually resolved through attorneys, Dash stated that he would be open to ending their feud at the moment.

“It was beautiful,” he said, with reference to Jay’s speech. “I’m glad he said it for the culture. We need to squash everything. So hopefully if that was an extended [olive branch] I’ll spin one back,” he said.

Tags
Dame Dash Jay-Z
Ikedichim Chibundu Follow on Twitter June 15, 2022Last Updated: June 15, 2022
Check Also
Close
Back to top button
Close
We use cookies on our website to give you the most relevant experience by remembering your preferences and repeat visits. By clicking “Accept”, you consent to the use of ALL the cookies. In case of sale of your personal information, you may opt out by using the link .
Cookie settingsACCEPT
Manage consent 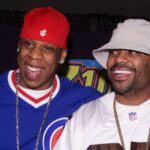