One Piece Film Red, the fifteenth movie in the One Piece series, debuted in theaters on November 4 after a hugely successful run at New York Comic Con. It is dubbed and subtitled in English. The lead character Uta, the theme song “New Genesis,” and six other songs in the movie are all sung by recent Geffen Records signee and well-known J-Pop star Ado.

These songs are all included on the album, “UTA’S SONGS: ONE PIECE FILM RED.” The 8-track K-Pop album is a complete arrangement of very pleasing musical compositions that will definitely get the listener in and through the varying moods of the project. 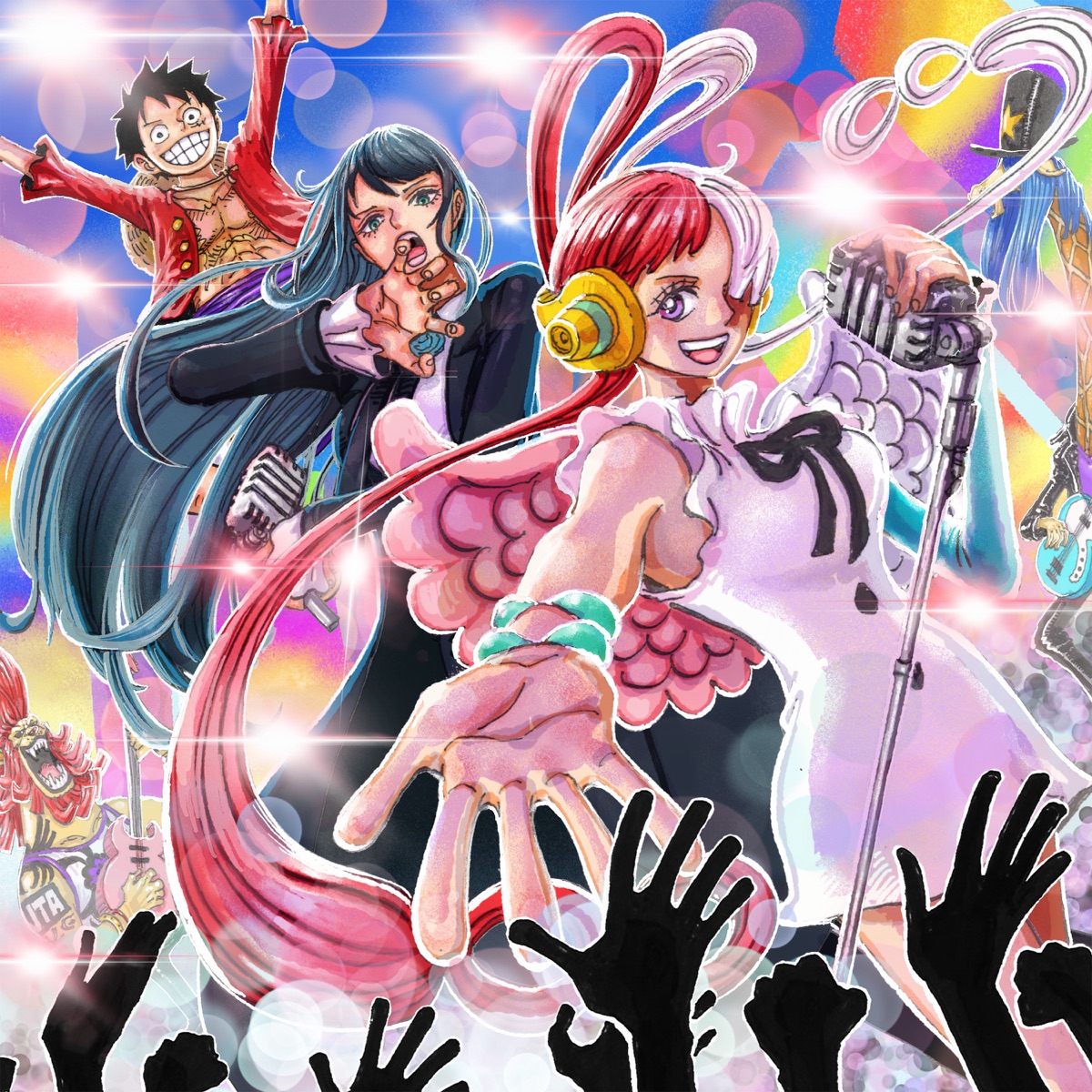 Three young acts appear to be on the stage, as the colorful illustration suggests, performing to the delight of their teeming number of fans who have their hands in the air, some raised to meet the hand of the lead performer that also has her hand stretched out to meet theirs while her other hand grabs hold of the microphone standing before her.

The album opens with “New Genesis” and the jivey tune is a captivating opener for the album. The vocalist sings so sonorously as the Pop-type beat comes into play, carefully fused with some Rock-EDM feel. Themes regarding love, relationships and new beginnings may be heard throughout the all-Korean song. The upbeat piano chords, percussion and stringy arrangements all culminate in a crashing end as the track fades. “Invincibles” comes in next and the vocalizations are top-notch as well as the dancey snare-drumming heard in the background. The upbeat track seems to talk about at strength, passion, love and resilience. The soloist sweetly rides on this very complex beat arrangement that seems to be a blend of hard Rock and R&B at intervals. The song is quite the listen which Rock lovers will definitely vibe to.

“Backlight” is next. The cheering in the background alongside the band instrumentals come in as a welcoming begining that readies you for an enchanting ride through the track. The soloist shows her creativity with her beautiful singing as support vocals help her cause. Some great background instrumentation brings the track to a pleasant end. “Fleeting Lullaby” comes with the needed vibe that has a Latina feel to it which in turn complements the Pop, upbeat tempo of track. Like tracks before this one, the soloist is also supported by background vocals that blend quite nicely with the raving beat capable of altering adrenaline levels. The banjo chords in the composition and the Hip-hop elements featured in the beat makes the tune a great listen. “Tot Musical” comes next with a chilling intro comprising of background chants that help pave the way for the high-tempo interludes that can be heard at intervals.

“The World’s Continuation” is a calm track that starts out with some grand piano chords, giving the song that ballad feel. The vocalist sings about fate, love, life and hope and does so very sweetly. The instrumental interludes join to add a soothing effect to the track and will definitely send waves of calm that would wash over the listener. “Binkusuno Sake” closes the album and the poetry-cum-nursery rhyme pattern of the track cannot be mistaken. This does a beautiful job of making the track a pleasurable listen. Also, the soothing vocals of the soloist, accompanied by the instrumentals playing to a gradual stop, bring the album and its listening journey to a chill end.

Ado uses an anime-styled avatar to represent her visual image. Her music has been described as capturing the angst and cautious optimism of Japan’s younger generations which is befitting for UTA, the character whose music she voices in the new One Piece Film Red, the fifteenth movie in the One Piece series film.

Load more
Tags
ADO
Ikedichim Chibundu Follow on Twitter November 12, 2022Last Updated: November 12, 2022
Back to top button
Close
We use cookies on our website to give you the most relevant experience by remembering your preferences and repeat visits. By clicking “Accept”, you consent to the use of ALL the cookies. In case of sale of your personal information, you may opt out by using the link .
Cookie settingsACCEPT
Manage consent