Dolls succeeds due to Poarch’s dedication to a consistent style and the economy with which she writes her songs (the EP clocks in at just under 14 minutes). Dark pop can be difficult to master since too much of either component might cause the whole thing to enter an uncanny valley, but Poarch’s blend of minor-key menace and off-kilter yet happy music provides a strong foundation for her rapidly-expanding career. 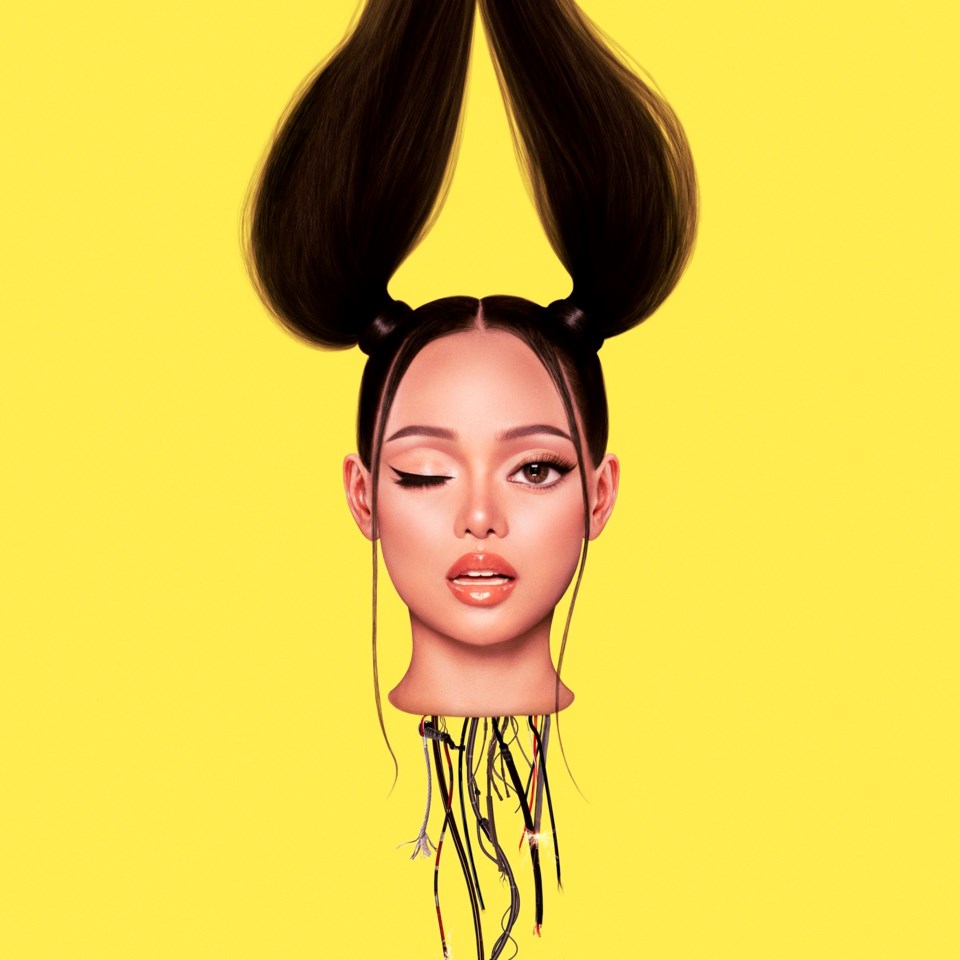 On a yellow background is the decapitated head of a doll wearing Bella’s face. But we can tell its head was severed from its body judging from the wires sticking out and dangling from the neck region. Still looking stunningly pretty as life slowly bids it adieu, one of the doll’s eyes is closed but somehow, her hair manages to look good despite the fact that its functions are shutting down. So technically, we behold a doll that is half-alive and halfway gone.

The 25-year-image old’s was established with the song “Build a Bitch,” which blends insouciant, pop-culture-referencing lyrics with a lip-sync-ready chorus and kiddie-music details and drives home its point with a sneer before moving on. The song uses the primary-color motifs of the mall chain Build-A-Bear and licensed characters like Bob the Builder and Barbie to take men’s expectations of young women to task; “I’m filled with flaws and attitude/So if you need perfect, I’m not built for you,” Poarch coos, leading into a manic choir singing “la-la-la” behind her.

“Dolls” winks at the well-known glam-goth fashion label Dolls Kill, the offerings of which hew closely to Poarch’s on-record aesthetic, while it buoyantly describes retaliation on anyone who could cross Poarch’s way. The song opens with weary “ha- ha’s” until skip-along beats take over.

“Villain” is a gleeful love-hate song. “I’ll be the villain tonight/I kinda like when you despise me after we fight,” Poarch wails, on a song that feels ready-made for a musical-theater treatment — one of the defining ideals of TikTok pop, and one that Poarch clearly thrives in.

And if she wanted to, she could totally make your life a “Living Hell,” or so it goes on the third track off the EP. The song is a bit of forewarning. Upfront, she is announcing to her love interest what could be obtainable with loving her.

On “No Man’s Land,” a vengeful track, the alt-pop diva Grimes endorses Poarch. Poarch sings of heartbreak in both the figurative and literal senses while being accompanied by a piano. She dreams of a world where she goes on the attack against everyone who has wronged her as the beat, which was co-produced by Sub Urban and Elie Rizk, gallops along. Grimes tosses off images of destruction — grenades, razor blades, “candle fires and crusade[s]” — in her gasped verse, which provides a sharp contrast to Poarch’s muscular yet winsome alto.

Closing out the EP with “Inferno,” featuring Sub Urban, ‘hell’, which could literally mean anything from a terrible situation to a terrible situation, seems bearable and fun ’cause of a lover’s presence. Though having fallen for appealing exteriors, against Urban’s better judgement, he still sticks around in place of running for the hills. Both acts were in perfect sync.

The record is a fast-moving collection of darkly hued pop songs that deploy sonics seemingly borrowed from a nearby nursery while playing with tropes of bad boys and worse relationships.

Load more
Tags
Bella Poarch
Ikedichim Chibundu Follow on Twitter August 13, 2022Last Updated: August 13, 2022
Check Also
Close
Back to top button
Close
We use cookies on our website to give you the most relevant experience by remembering your preferences and repeat visits. By clicking “Accept”, you consent to the use of ALL the cookies. In case of sale of your personal information, you may opt out by using the link .
Cookie settingsACCEPT
Manage consent