In preparation for this weekend’s Dreamville Festival, J. Cole and Dreamville Records have released their surprise mixtape, ‘D-Day: A Gangsta Grillz Mixtape’. The hardcore body of work is hosted by DJ Drama and comes with 15 tracks featuring the entire Dreamville family, which includes Bas, Cozz, Omen, Lute, Ari Lennox, EarthGang, and JID.

Cole can be heard dropping sizzling bars on three different tracks—”Stick,” “Freedom of Speech,” and previously-released “Heaven’s EP”—while other guests acts include 2 Chainz, A$AP Ferg, Sheck Wes, and more. This would be marking the first full-length project from Cole’s stable since the release of his solo album, The Off-Season, in May last year.

In 2019 too, Dreamville dropped a chart-topping compilation, ‘Revenge of the Dreamers III’. This weekend, however, Cole will be headlining this year’s Dreamville Festival in Raleigh, North Carolina. And that is in addition to his Dreamville signers. The two-day concert is scheduled to feature performances from Lil Baby, WizKid, Kehlani, T-Pain, Moneybagg Yo, Wale, Fivio Foreign, and more.

This is also DJ Drama hosting a project since Tyler, The Creator’s “Call Me If You Get Lost”, released last year and now Grammy-nominated. Go jam to the new body of work now available on all music streaming platforms.

Load more
Tags
DJ Drama Dreamville
Ikedichim Chibundu Follow on Twitter April 1, 2022Last Updated: April 1, 2022
Check Also
Close
Back to top button
Close
We use cookies on our website to give you the most relevant experience by remembering your preferences and repeat visits. By clicking “Accept”, you consent to the use of ALL the cookies. In case of sale of your personal information, you may opt out by using the link .
Cookie settingsACCEPT
Manage consent 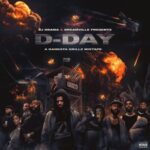