Following the announcement that Tems was a Golden Globe Award contender, Nigerian singers Waje and Yemi Alade praised Tems on social media. Tems received the nomination for her composition work on “Lift Me Up,” the lead single from the soundtrack for “Black Panther: Wakanda Forever.” Along with Rihanna, Ryan Coogler, and Ludwig Goransson, the fantastic singer was nominated in the Best Original Song Category. The announcement was also published on the Marvel Studios Twitter account, which praised the performers for their efforts.

Tems responded quickly to the shocking nomination, expressing her gratitude and how overwhelming the information was. Other huge Nigerian celebrities also entered the conversation to congratulate the singer, that has been winning nonstop. Powerful songstresses like Waje and Yemi Alade have rallied around Tems, blowing her trumpet and singing her praises. 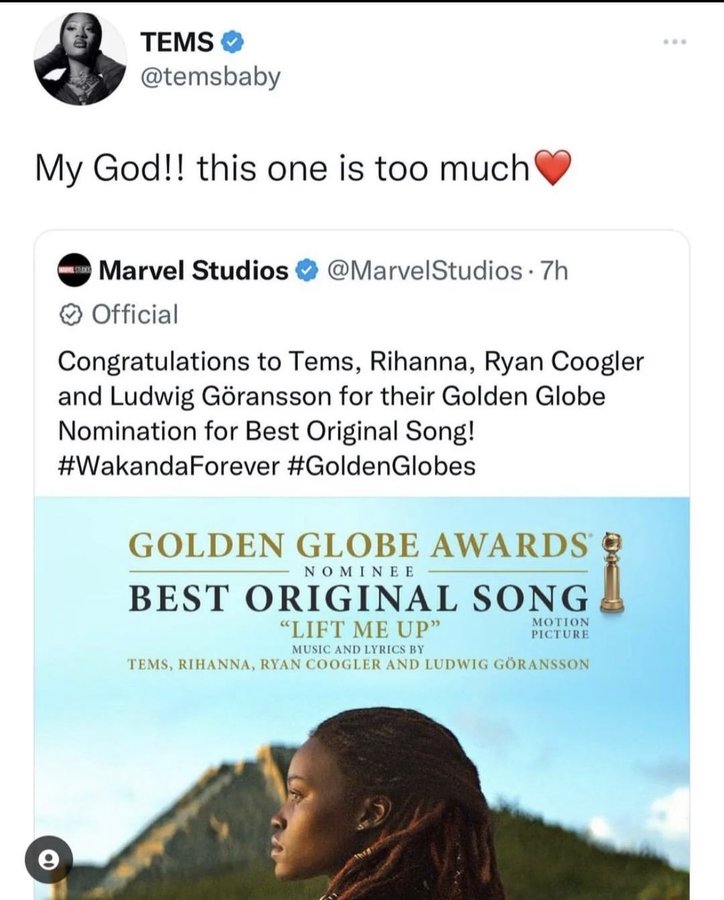 Meanwhile, on IG, Yemi Alade came through with a screenshot of Tems’ tweet, writing in the caption,” Big Tems @temsbaby is a WORLD WIDE BABY!!! Congratulations to you and your entire team”.

While all this is happening, the queen of the leading vibe has been globetrotting and killing shows in various countries, just like she did in South Africa only a few days ago in a big event put together by Amstel Lager.

Tags
Tems Waje Yemi Alade
Ikedichim Chibundu Follow on Twitter December 14, 2022Last Updated: December 14, 2022
Check Also
Close
Back to top button
Close
We use cookies on our website to give you the most relevant experience by remembering your preferences and repeat visits. By clicking “Accept”, you consent to the use of ALL the cookies. In case of sale of your personal information, you may opt out by using the link .
Cookie settingsACCEPT
Manage consent