Emotional Creature, Beach Bunny’s sophomore album, shows the band finding its musical footing as well as its individual members. The album explores the need to evolve, modify, and transform while discovering beauty in the wide range of human emotions. Emotional Creature, an indie rock band with a boisterous Y2K-inspired sound, is both vulnerable and confident, finding consolation in life’s messiness and navigating love through it all.

Featuring 12 songs of peppy pop punk guitar rock all centred around love, both good and bad, the Chicago outfit blaze a path by staying tried and true. Emotional Creature is easy to take in and admittedly not terribly deep – there aren’t any massive metaphors or complicated detours to parse through in order to understand what lead singer Lili Trifilio is getting at. That lack of complications might not seem like a selling point, but it absolutely is. 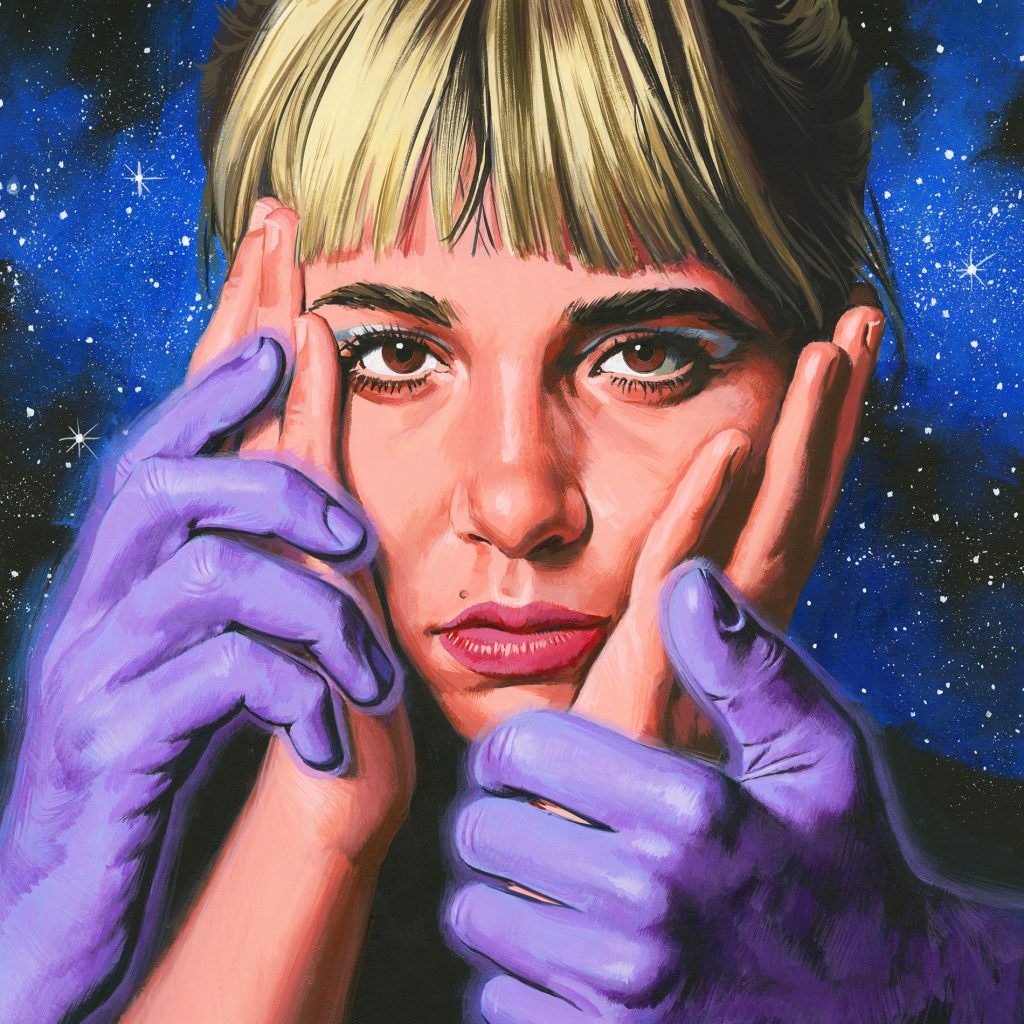 On the colorful cover art for this project, lead singer, Lili Trifilio holds her head with both hands as the galaxy of stars glow in the blue and dark skies behind her. Her face, partly covered by her blonde, bang hairstyle, appears long and sad, but there is another whose big, purple hands seem to play a consoling role, gently holding her hands and quietly acknowledging that she is an Emotional Creature.

On “Entropy,” the opener of the band’s striking sophomore album, Beach Bunny’s Lili Trifilio yearns for the freedom that would come from no longer having to conceal a secret romance, but the statement also emphasizes the bandleader’s certainty that she knows exactly what she wants. The song is a perfect example of Trifilio’s development as a person and a songwriter, and it shows the strength she has discovered in embracing her emotions.

As a bird’s eye view of Trifilio’s heightened emotional states, Emotional Creature goes off with all-consuming highs with the euphoric “Oxygen,” fueled by Trifilio’s soaring serotonin-boosted vocals. “Suddenly everything is easy/ I’ve never felt something so deeply/ ‘Cause with you, with you, I breathe again,” she exhales over raucous guitar fuzz.

Anthems like the bombastic “Fire Escape” and heart-fluttering “Karaoke” capture the intoxicating beginnings of a new relationship, detailing precious moments like carving your names into a subway seat and radio sing-a-longs on hometown drives. On the down-tempo rock cut “Love Song,” a starry-eyed Trifilio is finally self-assured about her partner for what feels like the first time.

Trifilio really succeeds on the more serious parts of the album, like “Eventually,” when she offers an uncensored picture of a panic attack. She transforms those low points—which could have just as easily been demoralizing—into inspiration. Trifilio demonstrates a greater emotional maturity on the catchy song “Weeds” as she recognizes how she should be treated.

However, there’s a silent confidence in Trifilio’s apathetic attitude toward a difficult partner on the glittery pop-punk cut “Deadweight.” “Scream” is Emotional Creature’s Eighties synth-tinged centerpiece—and the standout of the record—where you can envision Trifilio fully letting go, driving in a convertible with the top down, the breeze gently blowing through her hair.

At its core, Emotional Creature sees Beach Bunny trying to figure everything out. Musically they navigate the space between imaginative production and classic indie rock sounds, asserting a new and vibrant voice into the sound poised with lyrical sharpness and a willingness to embrace imperfections.

Emotionally, the album finds Beach Bunny at various stages of anxiety, confidence, and love, but leaves them with the relief that beauty can be found in the experience itself. Above all things, Emotional Creature is a really entertaining trip, even while it’s attempting to navigate through fear and sadness.

Sean O’Keefe handled all things production for the album.

Load more
Tags
Beach Bunny
Ikedichim Chibundu Follow on Twitter July 27, 2022Last Updated: July 27, 2022
Back to top button
Close
We use cookies on our website to give you the most relevant experience by remembering your preferences and repeat visits. By clicking “Accept”, you consent to the use of ALL the cookies. In case of sale of your personal information, you may opt out by using the link .
Cookie settingsACCEPT
Manage consent