Lucki, a rapper and occasional producer from Chicago, has finally released his long-awaited full-length début. Following the success of his critically acclaimed debut mixtape Alternative Trap in the summer of 2013, he gained attention and went on to release six further tapes and twelve EPs, the last of which, Wake Up Lucki, was produced by F1LTHY and released only one week before my 25th birthday. But Lucki is now releasing “Flawless Like Me” to the public after almost 4 years in the process. 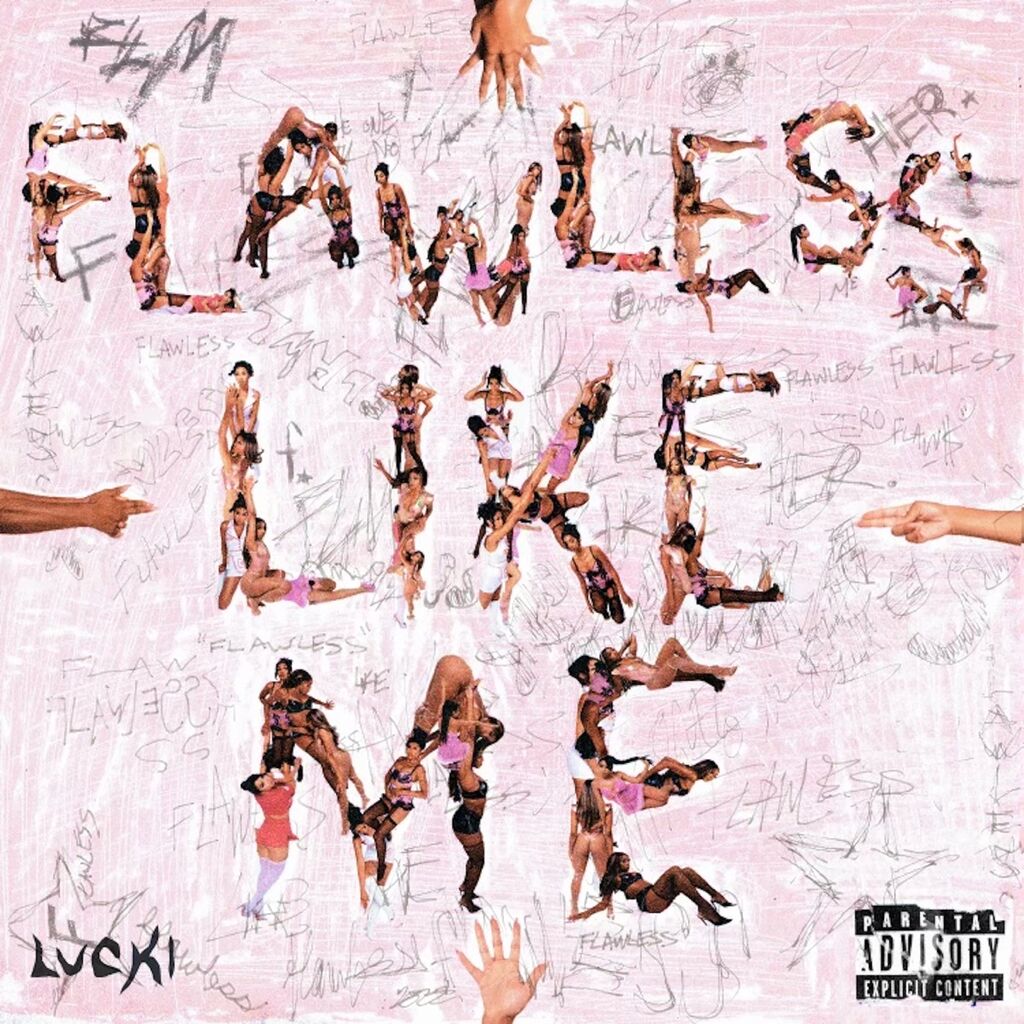 On a light-pink background, creatively showcased on the album cover is a group of different women striking different poses that read as the album title when zoomed out. A good idea for the project, actually.

In contrast to “Geeked n Blessed,” which takes a more triumphal approach by discussing how he is feeling specifically, “Made My Day” is a psychedelic yet bassy opener revealing that he has been searching for this bitch all over Chiraq. The song “Kapitol Denim,” on the other hand, ventures into murkier waters by boasting about the lifestyle the singer leads over a just before The lighter ballad, “Coincidence,” is about getting back in touch with a certain someone.

The track on which Babyface Ray joins in for the euphoric trap jam, “White House,” talks about being them dudes. The song, though, is preceded by “Been a Minute,” where Lucki advises not to ring his phone at all, done over some drowsy and rubbery Tay Keith production. As opposed to “13,” who adopts a wavier sound and boasts that he’ll “drop a 50 on that bitch like old Harden,” “Archive Celine” has a more upbeat vibe while discussing a hoe in Berlin by the same name.

“How Tf?” opens up about his drug problems while “DNA” expansively expands on the subject of the previous track, comparing himself to his aunt who also uses drugs. The song also incorporates some quirky synth leads and hi-hats. The synthesizers in “Goodfellas” have a more laid-back vibe and talk of having bodies in the trunk, in contrast to the horn-laced “I Get It, Twin,” which confesses to loving this expensive ass bitch.

After that, “VVS Keyski” describes the life of a rock star in a more ominous tone, while on “Brazy Weekend,” over a mysterious trap beat, he calls out a hoe for making it a point of duty to stalk everyone in his circle. However, “Droughtski” returns to a more mind-altering sound and talks about being wealthy through obstinacy, while the synth-based “Life Mocks Art” admits that the rapper raps about what he experiences in real life.

Over a glossy trap instrumental, “Noticed Ya” confesses that this individual doesn’t want to change as much as he does, while the upbeat “10pm in London” calls out a gold digger for not really loving him and only using him for his fortune. “The penultimate track, “Free Sex!,” adds some organs to the mix while paying homage to Atlanta trap pioneer Young Thug. Meanwhile, “My Way / Codeine Cowboy” begins with an otherworldly banger of a 2-Peter being in space time before discussing codeine use once more.

The first extra track, “Super Urus,” is a strong hybrid of trap and cloud rap in which the rapper confesses that he misses some hoe, while the second, “Y Not?” formally finishes the album with some plugg overtones that discuss pulling it out of the mud.

Showing vulnerability by divulging some life’s challenges and staying real through it.

Load more
Tags
Lucki
Ikedichim Chibundu Follow on Twitter September 30, 2022Last Updated: September 30, 2022
Check Also
Close
Back to top button
Close
We use cookies on our website to give you the most relevant experience by remembering your preferences and repeat visits. By clicking “Accept”, you consent to the use of ALL the cookies. In case of sale of your personal information, you may opt out by using the link .
Cookie settingsACCEPT
Manage consent