NBA Youngboy keeps releasing new music, and there is no stopping him. For a brand-new collaborative album named “3860,” the rapper from Baton Rouge now teams up with Quando Rondo. The album’s 16 tracks and lone guest appearance by Lul Timm were teased earlier this month. This follows YB’s solo album, “3800 Degrees,” from last month and the Gangsta Grillz tape “Ma’ I Got A Family” collaboration with Nicki Minaj. Everything about the project is as expected, with the exception that Quando obviously borrows more from Youngboy’s sound than normal, which isn’t too noticeable given how close their sounds already are. 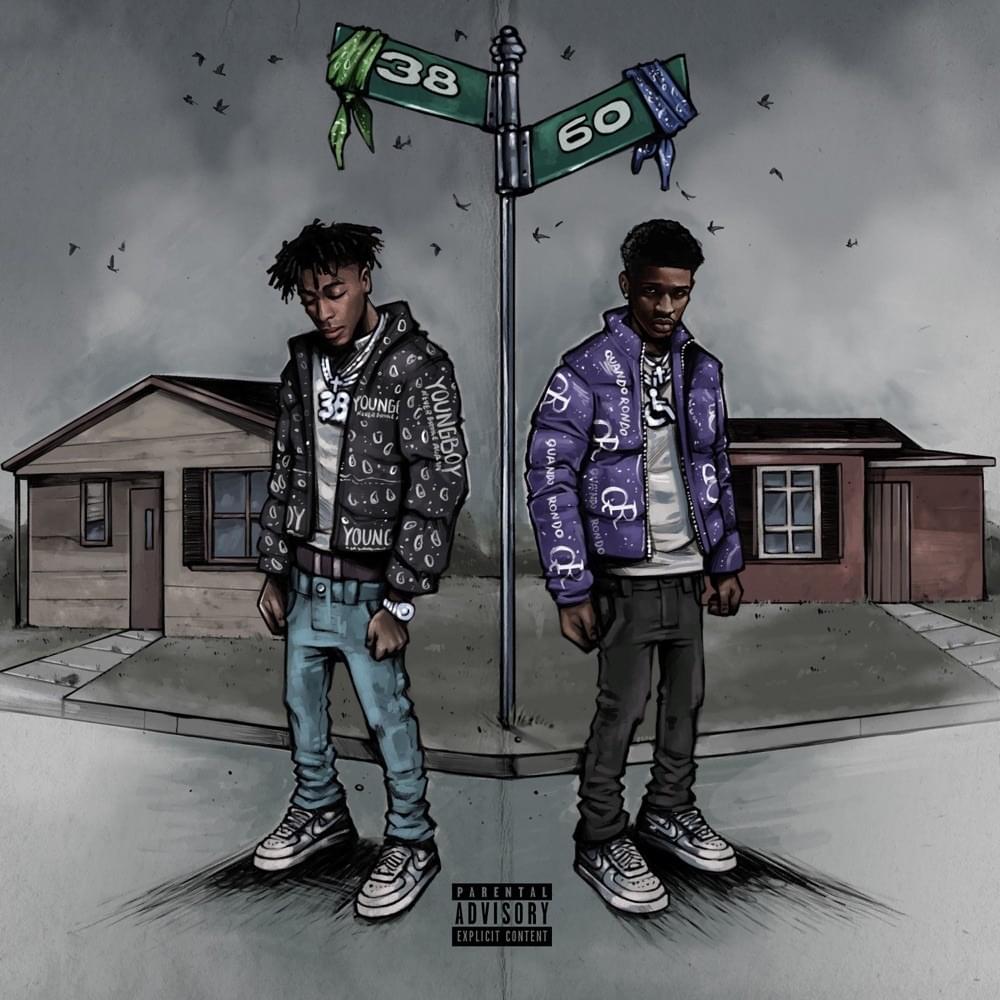 A caricature of both YB and Quando are seen standing side-by-side with each other under two different street signs hinged on a singular pole. On each sign is written the halves of the numbers that form the album title, and next to both numbers indicated on the street sign are green and blue bandanas that are tightly tied, with their tips hanging over their respective heads. We can also spot two modest houses on the both sides the signs point to.

The opening track of the album is “I Swear,” which features Lul Timm. Slick talk, the streets and difficulties associated with them, family, passion, and a bunch of profanities are among the song’s themes. The R&B and Hip-hop-influenced beat serve as a solid introduction to the album’s listening experience. On “It’s On,” Young Boy Never Broke Again cover topics like love, relationships, brotherhood, slick talk again, crime, and drug-related indulgences. The beat of the song shares similarities with that of track 1, closing with the beat interlude.

“Casket Talk” is just street. The lyrics frequently contain offensive language, including profanities and nasty expressions. The duo’s raps touch on a variety of subjects, such as love, family, respect, passion, criminality, gangsterism, drug use and of course, slick talk. The music production is excellent, and the beat is a typical Trap.

A piano opening to “Give Me a Sign” sets the stage for Quando’s vocals as he sings and begs God for a “sign” as the duo talk about the dangers and struggles of the streets. The lyrics touch on a variety of subjects, including gangsterism, family, crime, passion, prayer, mercy, the police, women, fear, trust, and treachery. The background piano chords give the track’s outlook more color and provide a unique touch to the production.

Only Quando appears on “cream soda.” The track is Trap-inspired and features themes of love and relationships, hustle, drug use, hoes, as well as the usual slick talking and braggadocio. A melodious tune is created by the vocalist’s singing and rapping in conjunction with the background piano chords in the song. YB returns on “My Friend.” The song’s intro is melodic and contains hints about subjects like friendship, love, brotherhood, and work. It also contains lines that discuss the police, crime, passion, women, and drug-related vices as well.

The album’s final song, “Running Away From Home,” is a fantastic song that perfectly captures Quando’s style as he sings on themes like love, family, passion, desire, a lover, personal struggles and some slick talk as usual. As he guides the listener through his emotions, he shares fragments of his memories while painting vivid pictures that many people may be able to relate to. The song is a commendable fit for the listening voyage that ends in a nice and relaxed manner.

Coming up in the streets, its consequences and perks, and letting us into their personal issues.

Load more
Tags
NBA Youngboy Quando Rondo
Ikedichim Chibundu Follow on Twitter November 26, 2022Last Updated: January 3, 2023
Back to top button
Close
We use cookies on our website to give you the most relevant experience by remembering your preferences and repeat visits. By clicking “Accept”, you consent to the use of ALL the cookies. In case of sale of your personal information, you may opt out by using the link .
Cookie settingsACCEPT
Manage consent