Across 7 songs, and two newly-included acoustic versions of original songs, Zevia takes us on a journey on her new project, “We’re All Sad Here.” A rather sad but very relatable journey through all she’s had to deal with as a person. Realness never got this pessimistic and brutal. 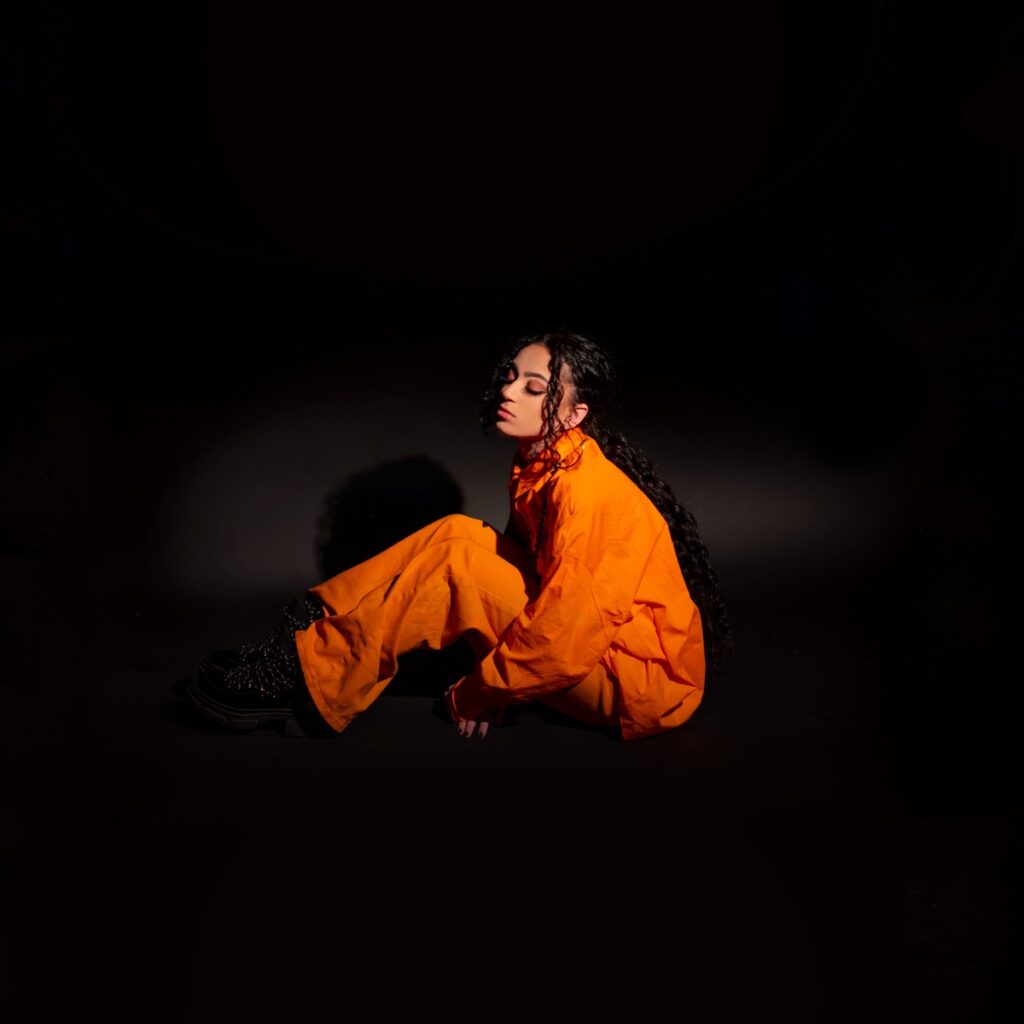 Sitting in the dark with the spotlight on her, Zevia dons an all-orange jumpsuit as she sits on the floor with her hands held together beneath her bent knees, like someone obviously sad and dejected, clearly depicting her mental state. The color of her outfit, as you may already know, is usually donned by convicts which possibly suggests that she is trying to tell us how much of a prisoner she is to her own mind, the dark room.

Zevia sets the sad ball rolling with “why am i alive” in which she questions everything she’s been told since she was a child. She doesn’t seem to understand why she needs to work for the world with her existence and yet not get what she deserves. Her experiences make her see the world different which makes her wonder just why she is alive. Though the song breathes sadness, it was beautifully rendered.

Riding on the back of the album opener, “why do i exist” channels the same energy, as she poses some really challenging but very relatable questions most would tend to shy away from like “What happens when I die?” which she sings in the first verse. At this point, she declares she is too numb to cry, as some folks have stabbed her with the hate she reads in their eyes, turning her into a loner who has become skeptical about staying alive. Real sad stuff.

She takes brings us even closer on “till death frees me,” where she talks about her coping mechanisms, their aftereffects, and how trapped she feels within the confines of her own mind. What’s worse is, rumors are what people would rather choose to believe about her, and inasmuch as she tries to stay alive, she still feels cold as a corpse on the inside. The piano keys which she sings over just have a way of rubbing in the sad emotions.

She does a introspective but depressing analysis of her life on “life, i’m over you,” where she admits that life has pretty much lost taste to her and that everything will stay the same or get worse, even. However, genuine love and great friends could’ve been the strings tethering her to life, should she have those. Opening up about her failed love life on “manipulation,” she narrates how terribly a boy she let into her world used her and her goods only to abandon her, leaving her worse than she was before.

Sad she couldn’t let her feelings be made known to a guy she admired and loved, so unrequited love becomes the theme of “we’re just friends.” And on “live to die,” she speaks on the troubles in her life, how drowning them is no longer working, the issue of war that is plaguing the world, and how she constantly seems to get the opposite of what she desires and should get from people.

“if depression gets the best of me” could easily come off as a suicide note that ended up being composed into music, which is a rather blunt but very realistic way to close an album this sad. The added tracks on the LP’s deluxe edition are just but acoustic versions of original songs also found on the album.

Addressing the very harsh realities of life and existence through the lens of a depressed female musician who is still trying to wrap her head around everything but is slowly losing grip.

The body of work was produced by Danny Scored & Zevia.

Load more
Tags
Zevia
Ikedichim Chibundu Follow on Twitter August 27, 2022Last Updated: August 27, 2022
Check Also
Close
Back to top button
Close
We use cookies on our website to give you the most relevant experience by remembering your preferences and repeat visits. By clicking “Accept”, you consent to the use of ALL the cookies. In case of sale of your personal information, you may opt out by using the link .
Cookie settingsACCEPT
Manage consent