Rod Wave’s brush with legal danger gives Beautiful Mind’s its structure as well as a sense that he’s charting new territory, and not just the themes of success and alienation that fueled past hits like Ghetto Gospel and Pray 4 Love. With Beautiful Mind‘s arrival, it’s looking like this project will be the end of a dramatic, therapeutic era provided by one of hip-hop’s most emotionally vulnerable artists. 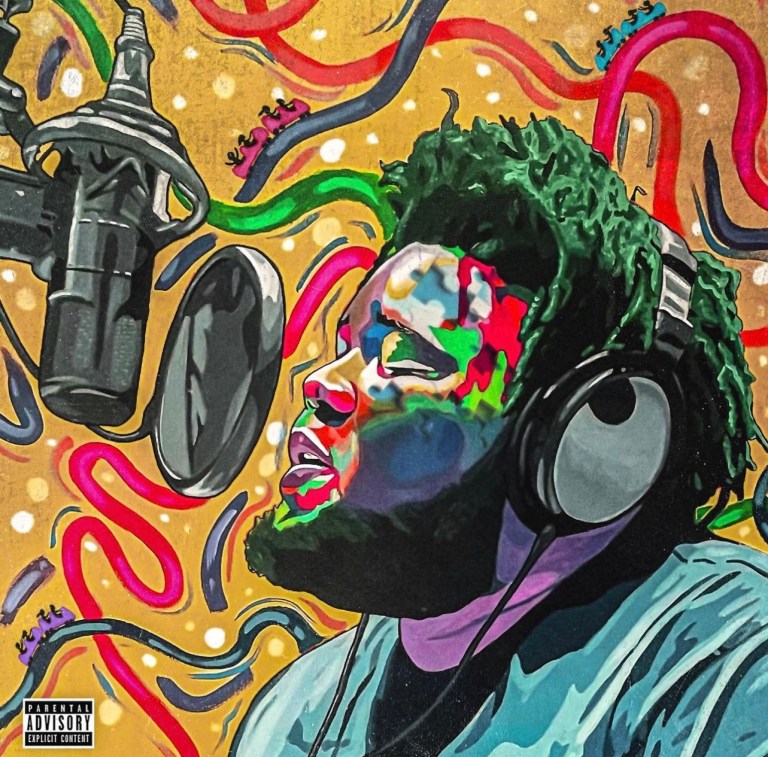 On the very colorful painting that is the album cover, an animated version of Wave can be seen in a somewhat studio scenario with a recording microphone slightly positioned above his head that is raised toward the microphone as he lays down some vocals over the beat playing through the headphones worn over his head.

But something spectacular is the energy he is surrounded by, depicted by the colorful worm-like things floating everywhere in the background, which we can take to be the effect of his words and vibe all created by his Beautiful Mind.

Expressing vulnerability, the kind found in sweet, impressionable kids, he gets in his feels and brings us along on “Leave Me Alone,” singing and pleading anxiously, “I don’t wanna be alone…don’t leave me alone.”

“They say I’m crazy, I’m bipolar, I need some damn help/Why say forever if we gon’ die by our damn self?” he sings on “Sweet Little Lies,” admitting that the promise of living happily ever after is a myth. Moat definitely the emotions of a troubled man who is desperate for some tender affection and care.

If he still feels a part of the rap world, it’s due to subtle touches, like stacking his verses into hard, anguished thrusts on “No Deal,” where he claims, “I’m trying to ball, niggas trying to take my life,” and says he doesn’t feel comfortable without carrying a .45 automatic handgun. The tune finds Rod Wave reminiscing about his youth as he sings, “I was just on the bus stop, getting higher than my brain/Headphones in, listening to Kevin Gates.”

“Rockstar Heart,” to a large extent, echoes Post Malone’s “Rockstar,” although the former questions a pills-and-thrills lifestyle instead of embracing it. That sense of deeply informed passion not only emerges from his performances, but the varied musical references he and his producers deploy, while a quiet storm radio interlude, “Pt. II,” samples K-Ci & Jo-Jo’s “Just for Your Love.”

On “Me vs. The World,” he sets things off with a slowed-down sample from the late Baton Rouge rapper Lil Phat’s “My Glock,” then dips into multiple references to 2Pac’s pre-incarceration classic Me Against the World. A handful of lyrics on “By Your Side” interpolate Plain White-T’s emo ballad “Hey Delilah.”

Wave spends much of Beautiful Mind‘s second half unpacking conflicted feelings over his partner. “In my cell all alone I still hear your cries,” he sings on “Mafia,” before comparing the way he and his team move like the Mafia and, oddly, the Taliban. On “Pieces,” he admits, “I tried to find another bitch, I just look for you in her.” And while “Everything” soars like a Brian McKnight ballad as he sings, “This my last song about old girl,” “Married Next Year,” sees him trying to find some kind of closure in order to move on.

On his fourth album, Wave gushes about love in a way that seems unusual for someone so closely identified with rap. He is a complex individual who oscillates between macho anger, heartbroken tenderness, and career desire. And even though he makes a great effort to prevent having suicidal thoughts, he is conscious of how brief life is.

Producers on the album include Aldaz, Amineskkrt, Angel López, Artiisan, Bad Habit Beatz, Blondy, B Squared and a host of others.

Load more
Tags
Rod Wave
Ikedichim Chibundu Follow on Twitter August 13, 2022Last Updated: August 13, 2022
Check Also
Close
Back to top button
Close
We use cookies on our website to give you the most relevant experience by remembering your preferences and repeat visits. By clicking “Accept”, you consent to the use of ALL the cookies. In case of sale of your personal information, you may opt out by using the link .
Cookie settingsACCEPT
Manage consent