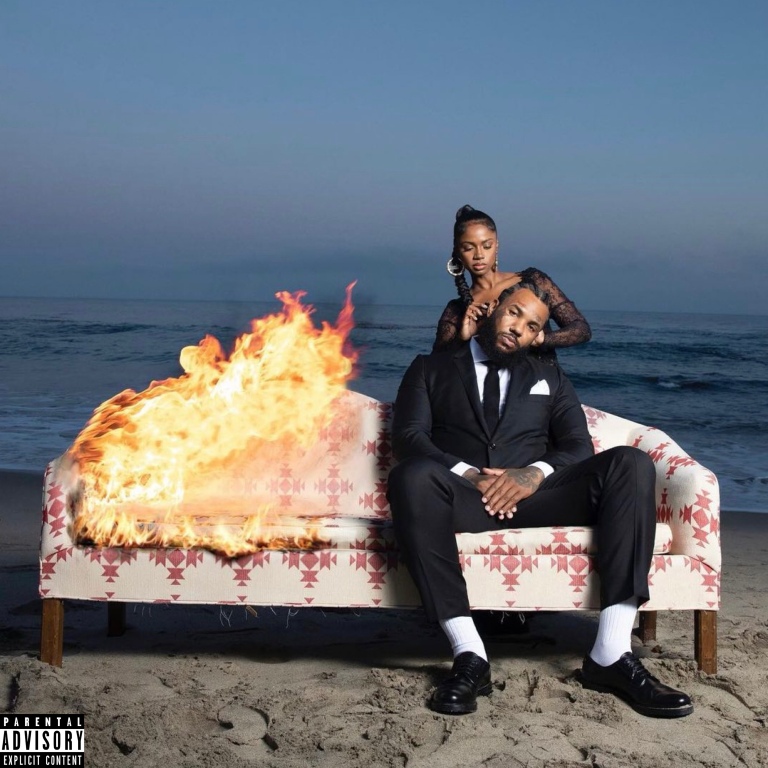 The Game, cleaning up nice in his black suit, long white socks and black pair of shoes to match, sits on a long couch that sits backing the bank of an ocean, while a pretty young lady positioned is behind him dressed in a lacy outfit with large hoop earrings and a thick, long, ponytail has her hands in his hair.

But notice something eye-catching about how the long couch is split in two halves with one side literally up in flames while Game and the lady are on the other side, comfortably relaxed like they’re fireproof. This possibly shows the “Heart Vs. Mind” contrast: one side characterized by chaos and drama while the other tends to be void of erratics.

The album opens with Game talking about being a living nightmare in “1 Time,” while Kanye West samples the late Eazy-E in “Eazy,” with Hit-Boy himself, Mike Dean, and even DJ Premier acknowledging that their lives were never easy. Fivio Foreign joins in on the drill-infused “Burnin’ Checks” that talks about being the genuine deal, but “Voodoo” features a sultry trap instrumental that talks about being a threat.

Game is rambling over his life tale on “Home Invasion” while YoungBoy Never Broke Again joins him on the DJ Paul-produced song “Opp,” which expresses their disdain for the federal government. Before “La La Land” enters jazzier territory and demonstrates his love for Los Angeles. “Outside,” featuring YG has a more ghostly vibe from S1 calling out individuals who claim Compton but didn’t grow up there.

“Change the Game” goes full-blown g-funk talking about never switching up while the piano-driven “How Far I’ve Came” says it all. “Heart vs. Mind” has a drearier tone to it thanks to DJ Mustard with the lyrics talking about his heart & mind being at war with one another while “No Smoke at the Polo Lounge” returns to soulful territory looking for smoke.

Following that, “No Man Falls” with Pusha T & 2 Chainz has a more drumless vibe talking about how they all crutches while the London on da Track laced “Chrome Slugs-n-Harmony” with G Herbo & Lil Wayne is a fantastic ode to the Bone Thugs-n-Harmony from the sample to London on da Track tapping into some hard g-funk sounds.

“Start from Scratch II” is a follow-up to a track off “The Documentary” album, and it also pays emotional homage to Prodigy. In contrast, “What We Not Gon’ Do” takes on a more futuristic tone as it discusses staying out of conflict and avoiding calling the police. Game is joined by Ye & Dreezy on Timbaland’s “Fortunate,” a song with Middle Eastern influences, and they boast about their success.

Before the pace changes to a slower groove and Game elaborates, “Rubi’s Rose” opens with Twista rhyming about fucking over an acoustic guitar. French Montana’s “Nikki Beach” follows the “Drake with the Braids” interlude with a phony promo for DJ Khaled’s impending 13th album.

The Meek Mill/Moneybagg Yo-assisted “Talk to Me Nice” playfully confesses being too big-headed for other’s advice. Continuing from there, the Mike Zombie/Swizz Beatz-laced “Money Cash Clothes” with A$AP Rocky embraces the boom-bap sound to flex how fly both of them are while “Killas” comes through with a tribute to The Diplomats’ de facto leader himself Cam’ron.

Then there’s “The Black Slim Shady”, which is a 10-minute diss track towards Eminem with some well sequenced beat switches throughout & mimicking bis flows. The organ/boom bap hybrid “Stupid,” on which Big Sean appears, boasts about how hard both of them work the mike, while the bluesy “.38 Special” talks about how every day is Cripmas. While “World Tours” with the late Nipsey Hussle is a spacey ode to their self-made hustle, “Twisted” takes it back to the trap revealing that the alcohol he sipping on got his buddy fucked up.

While the concluding track, “A Father’s Prayer,” blends a gospel sample with some dusty drums for an open letter to his daughter, the lavish “Save the Best for Last” featuring Rick Ross shows thanks for still being alive today. The album’s final track, “Universal Love,” makes the point that love is everything.

A rap-melodic display of the continuous back-and-forth exchange existing between the heart and the mind.

Load more
Tags
The Game
Ikedichim Chibundu Follow on Twitter August 13, 2022Last Updated: August 13, 2022
Check Also
Close
Back to top button
Close
We use cookies on our website to give you the most relevant experience by remembering your preferences and repeat visits. By clicking “Accept”, you consent to the use of ALL the cookies. In case of sale of your personal information, you may opt out by using the link .
Cookie settingsACCEPT
Manage consent