“Live at the Fillmore, 1997 (Deluxe)” introduces listeners to a veteran band that is equally interested in exploring their musical roots as they are in playing the songs as the long-awaited documentary of the best of those performances finally sees its release. On the live album, Tom Petty is joined by Benmont Tench on piano and keys, Mike Campbell on guitar and vocals, Steve Ferrone on drums, Howie Epstein on bass and vocals, and Scott Thurston on guitar and vocals. Roger McGuinn and John Lee Hooker also appear as guests.

Furthermore, “Live at the Fillmore, 1997” is a flawless and varied record of one of our most talented composers and one of our best bands performing at the pinnacle of their craft, even though it doesn’t quite compare to cramming yourself into a tiny theater. 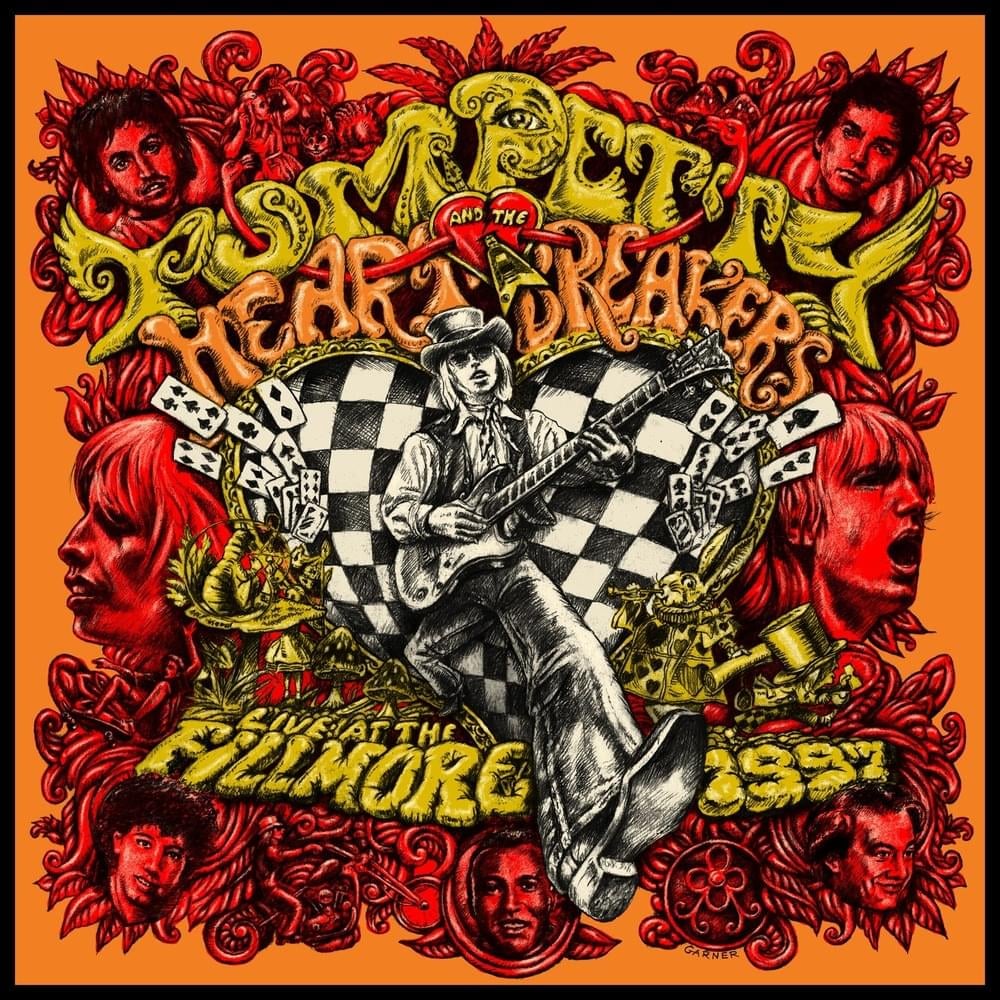 On a heart-shaped checkered image is a man dressed up like a cowboy playing a guitar with his legs crossed as cards fall out through both angles of the checkered image. At the helm of the photo, on all sides, are the different heads and faces of the band members dipped in red. The colorful animated graphics bring the album art to life.

There is a sense of uncharacteristic energy in songs like this cover of Little Richard’s “Lucille” as well as the pop/soul gem “Ain’t No Sunshine” by Bill Withers. But if these performances demonstrated anything in addition to the sextet’s professionalism and polish, it was that they are both accomplished musicians and ardent music fans.

However, in addition to that insight, songs like “Shakin’ All Over” show how Petty and the Heartbreakers are both individually and collectively finding their strengths as musicians and singers as they venture outside of their mutual comfort zone. Even while performing together, the group goes beyond simple stagecraft to demonstrate their return to the musical origins of their work.

Dylan’s “You Ain’t Goin’ Nowhere” and “Drug Store Truck Drivin’ Man,” as well as two songs that the late Gene Clark co-wrote for the legendary American band—”It Won’t Be Wrong” and “8 Miles High,” are among the country-oriented songs from the Byrds’ discography that Tom and the group perform with Roger McGuinn.

Petty and company operate in the same innately regimented but joyfully abandon manner when supporting blues legend John Lee Hooker on “Serves You Right To Suffer” and “Boogie Chillen.” This subtle rendition of “I Won’t Back Down” is more of a personal declaration than an anthem, but it nonetheless pays homage to the group’s influences in the best way possible.

The six-man group typically presents the repertoire in tightly organized arrangements; for examples, listen to their odes to Bo Diddley (“Diddy Wah Diddy”) and the Rolling Stones (“It’s All Over Now”). But when they stretch out in unexpected ways, as on this eleven minutes and more of “It’s Good To Be King,” they do so with restraint, which only serves to highlight their strengths. This is the definition of chemistry in action, which was repeatedly demonstrated on the Fillmore stage.

After focusing on songs from other genres, such as obvious roots references like Bob Dylan’s “Knockin’ On Heaven’s Door” and Chuck Berry’s “Around And Around,” Petty and company turn back to their own compositions like “Angel Dream” with a zeal that can only result from a rediscovery of the inherent value of their own work. And the pride the ensemble radiates on “Walls” is at least as tremendous as the pride they feel after nailing the Kinks’ “You Really Got Me.”

A homage to the showmanship of the legendary band.

Production was handled by sound guru, Ryan Ulyate and Campbell, aided by Tench and members of the Petty family.

Tags
Tom Petty & The Heartbreakers
Ikedichim Chibundu Follow on Twitter November 25, 2022Last Updated: November 25, 2022
Load more
Back to top button
Close
We use cookies on our website to give you the most relevant experience by remembering your preferences and repeat visits. By clicking “Accept”, you consent to the use of ALL the cookies. In case of sale of your personal information, you may opt out by using the link .
Cookie settingsACCEPT
Manage consent