Sean Combs, popularly known as Diddy, has once changed his stage name. First known globally as Puff Daddy, then Diddy, then Brother Love, Sean has now apparently changed his name again to “Love.”

Although Sean has been promoting himself lately as “Love”, much to the confusion of his fans who have questioned his frequent changes of name, Diddy has now announced his preferred moniker and the reason behind the name change.

Speaking on Ellen Degeneres’s show, the 52-year old rapper announced that he has decided to retain Diddy as his stage name while changing his middle name to love. While showing off his “Love” tattoo, the rapper who recently hosted the Billboard Music awards explained that he had decided to pick “Love” as his middle name so people would not only hear it in his music but also see it in the rapper.

“See, Diddy is my nickname. Love is my real name. I just changed my name to Love. Sean Love Combs, that’s what it says on my driver’s license; that’s my official name: Love,” he said. “I’m Love; I wanted to make sure that if anybody didn’t get the message, they could see it. I love tattoos, and I got that in one day.”

The star rapper was recently caught up in a web of rumours following a vicious back on forth between his girlfriends on Instagram. Diddy has however remained silent publicly while he tries privately to resolve issues between his women.

Watch his interview with Ellen below:

Tags
Diddy P Diddy Sean Combs
Olumide JokotadeMay 20, 2022Last Updated: May 20, 2022
Check Also
Close
Back to top button
Close
We use cookies on our website to give you the most relevant experience by remembering your preferences and repeat visits. By clicking “Accept”, you consent to the use of ALL the cookies. In case of sale of your personal information, you may opt out by using the link .
Cookie settingsACCEPT
Manage consent 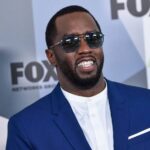