The biggest stars made out time to go celebrate with DJ Khaled as he bags his star on the Hollywood Walk of Fame.

JAY-Z, Diddy, and Fat Joe, amongst many others, were part of those in attendance during Monday’s unveiling ceremony. Also in attendance was Teyana Taylor, L.A. Reid, Sylvia Rhone, Steve Rifkind, and Cool & Dre. Khaled’s wife, Nicole, and their two sons, Asahd and Aalam, were also present to witness Khaled get cemented into Hollywood history.

Fat Joe was the first to speak, acknowledging Khaled’s giant strides, saying: “When I think of Khaled, I think of love,” he told the crowd on Hollywood Blvd. “In hip-hop for a long time, we haven’t really embraced fatherhood. Nobody has done it like Khaled. Music-wise, there’s nobody with a greater ear.”

With Khaled standing beside him in a coral-colored suit, Diddy touched on Khaled’s “relentless” grind and “unmatched” work ethic. “You’re a pioneer, an icon, a brilliant business man,” he told the We the Best boss. “But most importantly, you’re a great friend to all of us that’s here—a great father, a great husband, and one of the greatest people I’ve ever met.”

JAY-Z didn’t speak, instead he joined Diddy, Fat Joe, and Khaled’s family for a photograph in front of Khaled’s new star.

Tags
DJ Khaled
Ikedichim Chibundu Follow on Twitter April 12, 2022Last Updated: April 12, 2022
Check Also
Close
Back to top button
Close
We use cookies on our website to give you the most relevant experience by remembering your preferences and repeat visits. By clicking “Accept”, you consent to the use of ALL the cookies. In case of sale of your personal information, you may opt out by using the link .
Cookie settingsACCEPT
Manage consent 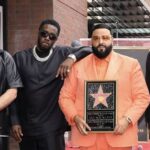 DJ Khaled Honored By JAY-Z, Diddy, As He Receives Star On Hollywood Walk of Fame