The year has begun in earnest for NBA Youngman, and for his fans, it might end up a year of great releases from the songster.

Already, the songster has released a song titled “Fish Scale,” as well as a music video for it. He’d also announced he’ll be releasing a mixtape later this month.

“Fish Scale” is actually nothing fish – it doesn’t take you to the sea and it doesn’t drown you in fish jargon. On the contrary, you get great musical energy with the song and accompanying music video.

And while the song and music video aren’t food per se, their ability to assuage the hunger of any lover of a good time and a good jam shouldn’t be in doubt. We have no qualms thinking of this release as dessert – an introduction to what is to come.

To listen to what the songster has just release is to want to look out for more from him. As far we know, y’all wouldn’t have to wait long, if the caption to the music video of “Fish Scale” is anything to go by…

Two weeks from now the NBA Youngboy mixtape should be out. Until then, peeps, face the scales.

Tags
NBA Youngboy
John Anusie Follow on Twitter January 6, 2022Last Updated: March 31, 2022
Check Also
Close
Back to top button
Close
We use cookies on our website to give you the most relevant experience by remembering your preferences and repeat visits. By clicking “Accept”, you consent to the use of ALL the cookies. In case of sale of your personal information, you may opt out by using the link .
Cookie settingsACCEPT
Manage consent 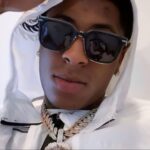